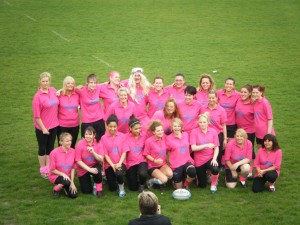 The match on 12th May will feature a team of men against a team of women all involved with the club supporting the East Cheshire Hospice, Breast Cancer campaign and the prostate cancer charity.

The event will be rounded off with a celebration at the ground towards the end of June and will feature music from the Estelle Lily band.

Match organiser Amanda Keogh believes the event has the potential to eclipse the £1500 it raised 12 months ago.

She said: “It is a truly great cause and the club have been fantastic in helping the vision become a reality.

“We raised a lot of money last year and it would be great to eclipse that.”

Keogh has been involved with the club for nearly two decades first as a supporter and latterly as a member of staff, and believes the event wouldn’t be where it is today without the support of the club.

“Bill and Bev [Roberts] have been fantastic,” she noted.

“We have had the complete backing of the club from the use of the facilities to the players themselves, who have got into the spirit of things.”

The match will feature a team of players from various sides at the club, while the women’s side sees a variety of wives, girlfriends and supporters of the club, some of whom have never played before but something that Keogh believes is a unique quality of the event.

“It will be a really competitive affair, but we’re hoping the result will be different as unfortunately the lads won last time.

“A few of the girls have been training with the lads on a Thursday night all season and we think we have a real chance.

“It’s great because for some of our girls, it will be the first time they will have played rugby so to get more women into the sport by whatever means possible is fantastic.”

Though the event is set to provide plenty of entertainment for all involved, Keogh is under no illusions as to the main purpose of the event.

“Everyone has had someone affected by cancer in one way or another so to support charities in any way we can is a must,” she said.

“The hospice doesn’t get a lot of money so the aim is of course to make sure they can keep going year in, year out.

“The community feel of the event can hopefully bring everyone together and create a brilliant event.”

The match marks the start of a memorable summer for Keogh who has been selected as one of the torch bearers for the build-up to the Olympics in London.

“When I found out I had been selected I was gobsmacked,” Keogh said.

“One of my colleagues at the club, Megan [Robinson] put me forward but I really didn’t believe I was going to be chosen.

“It will be a fantastic moment that I will never forget.”

For more information and to donate, visit www.boobsvsballs.org.uk