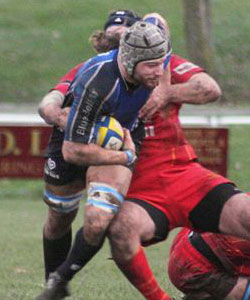 Matt Owen, Richard Hughes and Franky Barker touched down for the visitors as Blues slipped to a 14th loss of the season.

Director of Rugby Geoff Wappett was in reflective mood as he summed up an up and down season for his side.

He said: “It has been a long hard season and I think it showed today.

“The conditions were difficult and Dale handled them better than us, and this is never an easy place to come.

“We missed too many tackles and it cost us, it is a very disappointing end to a touch season for us.”

In bitterly cold conditions and running into a stiff breeze, Blues got off to a shaky start, absorbing plenty of pressure early on as the home side came flying out of the blocks.

Tom Barrett missed an early kick at goal for Dale but didn’t have to wait long for a second chance, this time in the form of a conversion after Andy Hodgson’s try out wide.

He was unsuccessful again but his side were in front.

Despite taking a blow to the knee, which would force him off at half-time, Matt O’Regan looked sharp and broke the Dale line with regularity.

Wharfedale’s lead was doubled after 17 minutes, as Blues had no answer for a driving maul allowing Dan Solomi to score his side’s second try; Barrett making no mistake with the conversion.

The onslaught continued and Blues were having to make tackle after tackle to keep their opponents at bay, though they could not prevent Barrett from slotting an opportune drop-goal to extend his side’s lead to 15 points.

Macc finally started to find their feet and had a driving maul of their own, but Tom Mantell was adjudged to be held up agonisingly short of the line.

Owen opened his side’s account shortly after though, combining well with Charlie Mulchrone and Sam Moss to run clear and score under the posts.

O’Regan went on another surging run shortly after and Barker followed suit, off-loading to Edd Stobart who found Josh Fowles but the winger couldn’t get over the line.

They did have a second try immediately after, a host of players grasping for the ball but it was Hughes who touched the ball down to leave the deficit at just three points with half an hour gone.

It was all Macclesfield at this point, but a turnover deep in Dale territory allowed Barrett to surge clear and extend his side’s lead back to 10 points with the conversion at the break.

Ross Winney entered the fray at the break replacing O’Regan in what would turn out to be his final appearance for Blues, and with the wind with them, the visitors looked far more confident.

Once again though, Blues inability to convert their pressure into points cost them as James Holland ran clear for his side’s fourth try and their bonus point.

Stobart almost provided his side with the perfect response, surging down the line before cutting inside only to seemingly decelerate with no support.

Wharfedale went down to 14 men after skipper Robert Baldwin was sent to the bin, Blues capitalising immediately to score through Barker.

All their defensive efforts in the first half left Blues running on empty and it showed as Dale ran in three late tries to put the result beyond doubt, ending Blues’ season on a sour note sealing sixth place for them.

Wappett added: “We’ve finished two places lower than we did last year but it has been a lot harder this time round.

“We need to get the players challenging each other for places and I believe we have the ability to challenge at the top of the table next season but it will be difficult.

“Ross has been a fine servant to this club and it is a shame to see him go, and we wish him well for the future.”