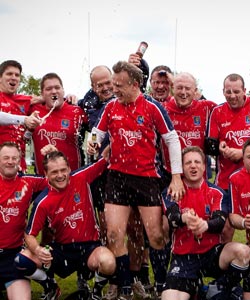 Taking the field after becoming champions of Division 5 South the previous week the squad was eager to create history, the 4th have never before been in a final.  The trophy was the Raging Bulls Plate held at Stockport Rugby Club.

Starting off at a very brisk pace, entirely bossing the first five scrums to the extent they shoved the opposition 15 yards each time.  Their line out was working well with Hooker Dale hitting his jumpers immaculately so the subsequent rolling mauls sent Tydesley reeling.

It was only a matter of time, it seemed before Macclesfield would cross the line, so inexplicably after 20 minutes their own defence was breached and they conceded.  Worse was to come because directly from the kick off Tydesley scored again to leave us 10 points behind after we had enjoyed 70% possession and territory.

However prior to half time and following 5 minutes of sustained pressure Paul Smith plunged over to give an interval deficit of 5-10.

Some reorganisation took place and Frain was introduced and made an immediate impact scoring a try to level.  Macclesfield were now very confident.  The front row weight advantage of Walker and Mannion was obviously tiring their opponents so that Bostock and Leonard were in the vanguard of everything that was good from the 4th team forwards.

It was no surprise that all this possession led to scrum half Smith crossing the line to take the lead.  The ever dependable Amos adding the conversion.  These two half backs had consistently kept centres Nick Smith and Parsons well supplied to keep Macclesfield on the front foot and with Swainson’s regular incursions into the line fast open rugby was the order of the day.

Both wingers enjoyed this Barbarian style of play, McCarthy’s speed was a particular problem to the fast tiring Tyldesley and he was unlucky not to be on the score sheet.  In fact a solo try by Cooke on the left wing was the best opportunistic score of the day a left footed hack down field and a wonderfully fortunate bounce allowed him to race across the turf and touchdown between the posts.

During the whole match the back row seemingly ubiquitous in their ability to be all over the pitch.  Foreman is a great find and shows maturity when making his frequent ball carries, Hall and substitute Tomlinson were both energetic and mercurial in their second phase domination.  This allowed No 8 Oakley, awarded the Man of the Match champagne to play tight in defence and impose his marauding game in attack.

In the last 10 minutes Captain Walker generously left the filed to allow Steve Mannion on as prop.  Thus father and son had the emotional experience of playing together, always a wonderful occasion.

This was a great victory for the 4th team and enormous credit is due to Jason Walker for welding together the side and creating fantastic team spirit.  It is Jason’s last match as captain, he hands on to Paddy McCarthy for next season.  Well done to everyone involved, unused and unselfish substitute  Crocker played his part from the bench with experienced advice.  It is good to see him after his absence from Macclesfield colours back in the fold and enjoying his involvement.

The celebrations went on well into the night.  Players had voted between themselves for the Players of the Year, Simon Street in the forwards and Tony Amos in the backs each deservedly being presented with a magnum on champagne