It’s only a week or so until the pre-season games begin and Head Coach and Director of Rugby, Geoff Wappett, is chomping at the bit. Yes, we’re all distracted by the Olympics currently, but this constant exposure to sport is just whetting the appetite for the rugby season to kick off. Macclesfield Rugby was lucky to catch up with Geoff briefly this week and grabbed the chance to talk about the new season’s preparations. Here Geoff talks about challenges, strategies and where this season’s main threats will come from. 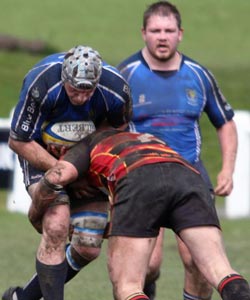 What sort of challenges do you foresee this season?

“Well, the first thing you’d have to say is that this league just gets stronger every year, so we’re expecting  a tough old fight. The teams coming into the league are determined and ambitious. You only have to look at Macclesfield: when we came in, we came in fighting and made the top 4, as did Rosslyn Park. Look at the strength coming into the league last year – Fylde, Ealing Trailfinders and Jersey: they were all right up there in the mix at the end of the campaign. This year I can’t really see it being any different.”

“I suspect that Albanians will be pretty strong: they’ve got a substantial financial base and the pick of the better players in the London area. Richmond, similarly, will come in believing they can progress, though I’m not sure they’ll present as much of a threat as Albanians.  Loughborough will prove to be a good, tidy side, but I don’t think they’ll be quite up there in the same bracket. For the last couple of seasons the promoted sides have come into the league and done spectacularly well, and don’t see it being any different this year.”

Will you stick with the same style of rugby as last year?

“How are we going to approach this campaign? Well, let’s put it this way. The game hasn’t changed:  you still need to win as much of your own ball as you possibly can, and hopefully mess the opposition’s up. So for me it’s simple – carry on doing what we did well least year, and put a big emphasis on our set piece to make sure we have more than our fair share of possession. If there is to be a change, it’s that we might possibly kick a little less. Obviously we will be kicking, but we’ve got a good line out so we can afford to keep hold of the ball. We won’t be kicking down field from deep defensive positions and give the ball away cheaply. Why give the opposition a chance to run the ball back at us?”

“Having said that, good kick-chase is still vital, and we’ll continue to work on that like we did last year, but perhaps we might be a little more conservative, as I’m keen to prevent our opponents from having too much possession. If you serve up cheap ball to the likes of Ealing, Fylde, Cambridge and Blackheath then they’ll punish you as often as not, whether they’re in their own 22 or in our 22. So when we have to kick defensively, we’ll be kicking for the touch lines and trusting our line out to put the pressure on their throw. Even if they do manage to secure the ball, ten at least we’ve then got an organised defence waiting.”

Will there be any change in the system to accommodate the new players?

“No: definitely not. The strategies we employed last season of strong defence and good ball retention will remain the same, even though we’ve changed much of the personnel. The players I’ve brought in are here because I feel that they can fit in the system: there’s no intention of trying to change the system to accommodate new players. I actually feel that the new lads will, if anything, actually make our system stronger.”

What about the existing teams? Will they present the same threat?

“It’s difficult to predict just how many of last year’s strongest teams will perform. They’ve all lost a few players and recruited others, so whether they’ll perform to last season’s standards or exceed them is difficult to judge at this stage. I do suspect that Ealing will be possibly even stronger than last year. As for Fylde, well, I just don’t know: whether they’ll have the same strength in the scrum as they have behind it; only time will tell. Blackheath are a good outfit who put together a good run towards the back end of last season, and will no doubt be strong again this year. All I would say is that if supporters want to see some great rugby then they should get down to Priory Park. I’m not saying that to brag either. All I mean is that if we want to get the results we want, then we’re going to have to play some great rugby.”

What about the team coming down from the Championship –Esher – how do you think they’ll fare?

“For years it’s always been the case that the relegated sides have lost players and tend to struggle: you only have to think of teams like Coventry and Birmingham. But Esher are a very well-established money Club who will be able to put together a pretty strong team. I’m sure their intention will be to bounce straight back to the Championship, so they’ll prove to be a threat to all the other teams.”

“We’ve got an internal game a week on Saturday on the 11 August, so I’d like to just give this reminder, particularly for those who haven’t started pre-season training yet like the second team: get yourselves down to training and get moving. The message for supporters is the same: it might not be a totally formal game, but get yourselves down if you get the chance as this should be good. It will be refereed by Carl Kirkpatrick, a former Super League referee, and kicks off at 11.00 am.”