Macclesfield came up against Championship side Rotherham in their second pre-season friendly, but were out-muscled in a 7-17 loss.

The Blues did well to stop the majority of Rotherham’s attacks, and showed signs of attacking potential under the spotlights on Wednesday night. 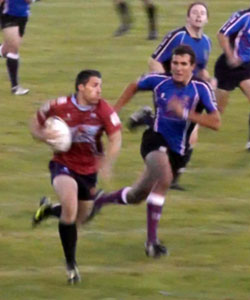 “You always have to get these games into perspective; I invited Rotherham to play us because I want our guys to be exposed to tougher, harder players.

“Tonight we found that difficult, our set pieces weren’t good enough. Whoever we’re playing, with our scrummage and lineout we’ve got work to do.

“We will do it, they’re all the things I can put right, I’m not worried. I’d rather we lost pre-season games and learnt things about ourselves and what we need to do to improve on.”

Rotherham held the possession from the kick-off, probing the Blues defence for a way through.

With ten minutes gone the visiting side were still controlling the game, with the Macclesfield back line holding strong.

Rotherham scored their first try after 15 minutes on the far right side. Their kicker missed from close range to make the score 0-5.

Big tackles from Moss and Mantell helped try and turn the possession, but the championship side managed to hold the ball.

Ten minutes before the break Rotherham outfoxed the Blues defence a second time, but failed to score the kick to make it 0-10.

Matt O’Reagan attempted an ambitious kick at the half way line before the half-time whistle, but missed the target.

Macclesfield came back stronger in the second half, with several chances to break through scuppered by the visiting defence.

Andy Walker got the Blues on the scoreboard after some counter-attacking play, Tom Eaton following up with the kick to make it 7-10.

After the try the home side enjoyed a period of possession, keeping Rotherham on the back foot.

Rotherham scored their final try of the night after fighting back against a tired Macclesfield side, this time converting the kick to make the final score 7-17.

With 20 minutes to go Moorhouse made a last-ditch tackle to stop the Rotherham break on the left wing, after which Rotherham were penalised and the ball was cleared.

The last ten minutes were closely contested; however the final whistle blew to keep the score at 7-17, with the away side taking away victory.

Wappett added: “We’ve got players with a lot of promise, and it is still early doors. We’ve got the coaching, and it’s our job to make people better, making the team better.

“Defensively, to have looked at the percentage of ball, then to only lose by three tries to one then there was some pretty enormous defending.

“When the defence started to break down people were covering each other and showed a lot of bottle.

“Some of the individual one on one tackles we need to improve on that direction but that was a very good point and one would assume that nobody would beat us like that in a league game.

“On the little possession we had, we scored a very good try, and we threatened really well on 3 or 4 occasions, with some good offloading, and good support play.”