The new season is only just around the corner, and the pre-season fixtures are starting to pick up pace. Some coaches view these games as simply an opportunity to give all the squad players a bit of a run out, however, Head Coach and Director of Rugby, Geoff Wappett, sees things differently. For him pre-season friendly games are all about assessing what your squad is capable of achieving, spotting where your strengths lie and identifying areas of weakness that need to be addressed. There’s little point only playing teams who you would normally expect to beat on a regular basis as there’s nothing to be gained or learned from that. However, pitting your wits against a team of full-time professionals from the Championship is a different matter entirely. If you really want to see what stuff your team is made of, then that’s the way to go. So what were Geoff’s impressions of the games against Rotherham and Wilmslow? Did the performances come up to scratch, or are the Blues still a work in progress? 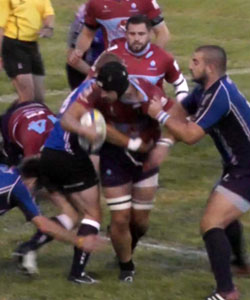 How do you think the team fared against professional opposition?

“Rotherham turned up with a pretty strong side last Wednesday night. In spite of some of the conjecture about how strong a side they’d put out, they sent a 15 man team that probably contained a good 11 or 12 automatic starters. So obviously it proved to be a tough match. The over-riding impression was just how big and physical Rotherham were. It was good for us in a way as it taught us a lesson in how to stand up to that sort of challenge. They were already 3 or 4 games into their pre-season, so consequently their set piece was much stronger than ours. We didn’t manage to win a lot of set-piece ball, and what we did manage to win was difficult to use productively.”

What did you learn from the game?

“Well, what we definitely did learn is how to defend. What was also encouraging is that we managed to turn a few balls over too. We defended well in the circumstances, we were courageous and brave, and on the few occasions when we did manage to get hold of the ball our support play looked good, we made one or two line breaks and we handled the ball astutely. Considering the ratio of possession we managed to get, we came out of the game with great credit: going down 17 – 7 to a Championship side with what wasn’t necessarily our strongest 15, was quite an achievement I think. Having said that I never like losing, no matter what the circumstances might be.”

What positives were the Blues able to take from the game?

“Although it was a tough old game, it also made us look at our situation realistically which is useful with the new season pending. Nobody will have gone home thinking aren’t we wonderful, but they will have ended the game thinking we may have lost but we rose to the challenge. Other challenges won’t necessarily be as tough as that that in the coming months. Pre-season games aren’t the best yard stick to judge by, but it will have shown our boys what playing against full-time professional rugby players is like.”

What thoughts have you got about the Wilmslow friendly?

“The Wilmslow game was different entirely. We had to mix up the squad as not everyone who was available for Rotherham was available for Wilmslow, and vice versa. So, contrary to some statements I’ve heard the Rotherham team wasn’t necessarily the strongest team I could’ve put out. What will happen is that the team I select for the game against Birmingham Solihull at the weekend will bear more of a mark of the type of team we’ll be starting the season with.”

“Anyway, Wilmslow tackled well and managed to spoil an awful lot, and sadly the referee didn’t really get a grip on the contact area which made the game very bitty. All these factors made it a difficult game to play. The fact that the opposition managed to kill the ball regularly made it difficult to play with any sense of continuity. However, the longer the game went on our fitness and our strength began to show. We made some good line breaks and showed some good support play, which I was greatly encouraged by.”

“Pre-season games are all about getting amongst it, taking the knocks and the bumps and getting match fit. They can be a great leveller, and will no doubt have shown one or two of the boys who thought they were pretty fit, that they still have some way to go before they can truly say they are really match fit. The problem is there’s no way you can simulate all the pushing, pulling, driving and fighting that takes place in a ruck or a  maul, unless you’re actually involved in it.”

What positives can you take from the two games overall?

“In terms of player performance, I though Joe Clowes who played in the back row against Rotherham had a good game. He played very well and worked incredibly hard to his credit. Dave Marwick and Tom Cruse were every bit as good as I know they can be, and they will be really useful additions to the Blues squad over the course of the season. Elliot Brierley showed up very well at outside centre against the big units of Rotherham. For all of their experience they failed to break us down in midfield, and were only successful because of their physical superiority closer to the try line. Jack Stott-Sugden played well at lock and in the back row after some time out last season.  Kirk Robinson also played really well. He came on against Rotherham and stood up well.  He’s only a young 19 year old lad, but he fared pretty well against the big strong Rotherham pack. He tackled well, rucked well, and generally got stuck in.”

“Jack Moorhouse had a run out at full back on Friday, after Matt O’Regan took the shoulder injury, and he fared really well. He continued at 15 against Wilmslow. We’d discussed this towards the back end of last year when we found out that Fergus Mulchrone was off to Rotherham. This little taster of playing at full back has shown he’s got the necessary assets to make a success of it. He’s a good broken field runner, he’s got a solid defence and he’s got a wonderful intuitive sense of knowing where the opposition’s defensive weak spots are and exploiting them. He still needs to work on his positional play, but that will come with experience.

Were there any negatives?

“Unfortunately Ryan Parkinson broke his hand early on against Rotherham and will be out for a few weeks. Ryan played 27 consecutive games before he had an injury last year, and this year only lasted 5 minutes into the first pre-season game. It’s a real blow for both Ryan and the Blues, because he was definitely a front liner for this season. Matt O’Regan also took a knock to his shoulder and will be out for a while, and Frankie Barker came off with a knee injury, but hopefully he won’t be out for too long.”