It’s with regret that we have to say goodbye to what has been an unprecedented summer of sporting excellence. The Olympics and Paralympics have exceeded all our expectations and we’ve witnessed feats of sporting endeavour that have sometimes defied belief. The driving force behind these games has been legacy and the desire to inspire a generation. Well, Macclesfield Rugby is pleased to say that we’ve been banging this drum for some time, and we’ve managed to produce our own set of potential stars of the future. Last week we brought you news about 3 of our Under 16s currently playing with Sale Sharks EPDG and the County squad: Harry Jackson, Christian Taylor and Dan Greer. Well, this week it’s time to tell you about another of our rising stars, loose head prop, George Williams. 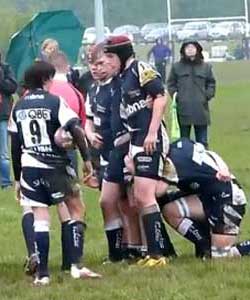 The young forward plays for Macclesfield RUFC, the County squad and also Sale Sharks EPDG at Under 15s level under the guidance of Head Coach, Ray Unsworth, and his assistant, David Wilkes. What makes George’s tale all the more remarkable is that he playing up a year.  George also took part recent Under16 academy tournament at Northampton for Sale Sharks, along with Harry, Christian and Dan, and played up a year to be in the squad. George, however, is no stranger to this. Last season he got his first taste of Premier Club Academy tournaments when he played for Sale at Broadstreet RUFC. George played up from the Under 14s and represented Sale at Under 15s.

Macclesfield RUFC would like to congratulate George on his magnificent achievements at such a young age, and would like to wish him continued success for the future. We know our supporters would like to echo those sentiments and thank George for representing the Club with pride and passion. Well done George.

Putting in the work 💪 @O2 | #WearTheRose

From the Killer Bs to heartbreak in Yokohama Join former Scotland captain @kellydrbrown and England and Lions second row @GeorgeKruis as they take us through their #JerseyTales 🗓️ 06.07.22