On the same weekend that Macclesfield Blues kicked off their National League One campaign, 3 of Macclesfield Rugby’s brightest young stars went on to represent Sale Sharks Development Group at an Academy competition in Leicester.  The Club is delighted to announce that all 3 of these upcoming young players enjoyed a slightly more successful day of it than the Blues, who succumbed to a disappointing opening day defeat to Blaydon.

The 3 gifted players Harry Jackson. Christian Taylor and Dan Greer (pictured below) took part in the competition representing Sale Sharks’ Academy, under the auspices of Head Coach, Ray Unsworth., and his assistant, David Wilkes. Harry and Christian joined Macclesfield RUFC some years ago and have been playing at the Club since the age of 7. Dan joined the Club 3 years ago when his family moved to the area. 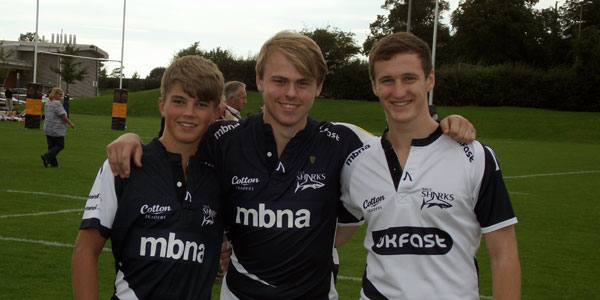 In Saturday’s competition Sale Sharks Under 16s played a round robin of games against representative sides from Northampton, Leicester, Leeds and Newcastle Academies. Sale Sharks successfully overcame both Leicester and Leeds and managed a creditable draw against Leeds’ Academy. Unfortunately they couldn’t manage to pull off the result they would’ve wanted against Northampton and lost narrowly.

The weekend was just the start of what will prove to be a busy season for these young players.  18 players in total, including the 3 young stars from Macclesfield Rugby Club, will be appearing in the county trials later this year. The successful players will then go on to play for one of the 4 Northern Counties: Lancashire, Yorkshire, Durham and Cumbria. What’s more for the first time in this age group the players could then go on to be selected for both the North of England and England teams.

Macclesfield Rugby Club would like to congratulate all 3 players on their sterling achievements and wish them every success for the coming months. They’ve already done the Club and Sale Sharks’ Academy proud, and we’re confident that they will continue this fine work in the future.