Macclesfield U7s carried on their run of fine form with a dominant display at last weekend’s Manchester Festival Shield competition. Competing against 20 teams from around the region, the U7s emerged victorious and rightly brought home the first silverware of the season to Macclesfield Rugby Club. Proud Head Coach, Lee Birkett, was naturally delighted by the outstanding display from every member of the squad in what was their first ever tournament appearance. 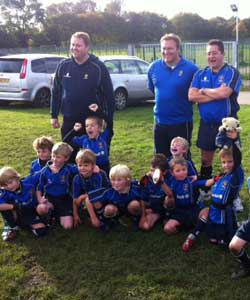 The day was not without intrigue and controversy, however, after the U7s were denied a legitimate try when the officials failed to note the score within the allocated time limit. Still, it all turned out fine in the end. Well done once again boys, and congratulations.

For a full report and explanation of the Manchester machinations, go to the under 7’s page of the website.