Macclesfield U7s got their season off to a flying start when they played their first home game of the 2012-13 Season against a very well-drilled Lymm U7s side. Head Coach, Lee Birkett, was proud of his young charges and delighted with he what witnessed: not only did the young players put on a fantastic performance, but they also adapted seamlessly to the new RFU rules of play for the U7 age-category. The match on Sunday was the first time the players had performed under the new age-related rules, and they seemed to adapt well. 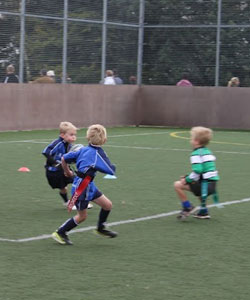 The new rules of play are being adopted by some, but not all clubs within the region, so it will inevitably take the players and the coaches some time to fully adjust to the changes. It should also be noted that that Macclesfield U7s will occasionally be fielding both 7-a-side and 4-a-side teams in future, depending on the opposition they are playing.

The main changes to the rules are;

“As the game is played with a fewer number of players, each child appeared to have more of a hand in their games, and more tries were scored than in a normal 7-a-side game. Overall, it was a much more involving game for all concerned.”

“I would also like to give a special mention to a number of players who won Players of the Day medals and demonstrated how well they’re developing as young rugby players: Fenton Brey, Thomas Croker, Fraser Day, James Hartley, Billy Simpson and Jamie Wilby.”

“In addition to these medal recipients, 3 other players also deserve special mention: Oliver Davis and Billy Birkett who the coaches believe are both showing talent beyond their years, and Ethan Mason whose play is improving week on week. I am looking forward to seeing all of our Boys develop and we are really excited about the season ahead.”

“Can all parents and guardians please note that MRUFC has only been permitted 1 team of 7 to enter the Manchester Festival on the October 7.  As is customary with all clubs, we will be fielding our strongest side and I am sure you will all give 100 percent support to our boys in our first competition.”