Following the successful elimination programme for the England RU Under 16 team, Macclesfield Rugby Club is delighted to announce that two of our rising stars, Dan Greer and Christian Taylor have been selected for the provisional England Under 16 training squad development day which will take place at Sandbach RFC on Sunday, 2 December, 2012. The Club would like to congratulate both of the boys on their sterling efforts. 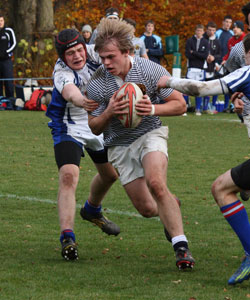 The emergence of Cheshire as the most successful team in the inter-county competition has been reflected in the squad numbers selected for the Development day at Sandbach, with 13 players from the county being chosen, including Macclesfield players Dan Greer and Christian Taylor. That number is matched by the CND squad and Yorkshire, with Lancashire providing seven.

Following the Sandbach trial, the squad will be trimmed down from 46 players and a further assessment/trial will then take place on December 16 at Woodhouse Grove School to finalise the squad for a weekend session on January 26/27 before the Divisional weekend at Broadstreet RFC from February 1/3, 2013.

There will be two matches at Broadstreet on February 3 with North v South West at 11am and London & SE v Midlands at 1pm. Training camps will then follow in February for the England Under 16 squad and the two sides that will take part in the annual Wellington Festival at Wellington College in Berkshire from March 30 to April 5. England Under 16s will also host Italy Under 17s and play Wales Under 16s in April. The dates and venues for these matches have yet to be confirmed.

Macclesfield Rugby Club would like to wish both Christian and Dan all the very best for the weekend trial.