MRUFC are delighted to announce the launch of a major new sponsorship deal between the Macclesfield Rugby Club’s (MRUFC) Mini and Junior Section and nationally-renowned law firm DWF Solicitors.

DWF LLP is one of the fastest growing law firms in the UK. It offers a full range of services to both businesses and private clients with teams specialising on all aspects of law, as well as providing specialist advice across a range of sectors including education, energy and infrastructure, food, health, public sector, retail, outsourcing and technology, and transport. The company employs 1,800 people based in Birmingham, Coventry, Edinburgh, Glasgow, Leeds, Liverpool, London, Manchester, Newcastle, Preston and Teesside and has an international reach through its relationships with law firms around the globe. DWF is committed to the active participation and support of the local community and community projects, to help make a positive impact and build sustainable relationships. 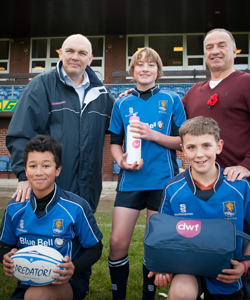 DWF has already supported MRUFC over the course of the last year, and has decided to increase its involvement with the Club, particularly with the Mini Junior section. Under the new sponsorship agreement, each budding rugby star will receive a complimentary boot bag and water bottle, whilst the outstanding player in each age group will be awarded a DWF Man of the Match Trophy by the coaches each week. The deal was launched at Priory Park on Sunday 4th November when all the Mini/Junior teams played competitive fixtures.

Speaking at the launch, David Pickering, National Head of Family at DWF commented:

“We originally partnered with Macclesfield RFC in October 2011 as we were looking to partner with and support a successful local organisation whose values mirrored those of our own. After looking at various options and having had the opportunity to talk to Bill Roberts, General Manager at MRUFC, we decided that the club was an ideal fit.  The club epitomises our ethos. It is progressive and ambitious: it encourages and supports its players both on and off the pitch, and is ingrained in the local community. As a values-led firm we are committed to supporting our local community.”

“As an organisation it is important for us to give back to the communities in which we live and work, and the sponsorship with Macclesfield Rugby Club is a key part of that. Last year we sponsored the main MRUFC team and it was important that we strengthened this relationship for the year ahead: supporting the next generation of rugby stars through the Mini and Junior Section sponsorship was the perfect way to achieve this. There is some real talent at a junior level and the Man of the Match trophies will help celebrate the achievements of the young participants.”

“We discussed with Bill our desire to support and get involved with the mini and junior section as recognition of the magnificent effort and commitment that the club and its people put into this area. The enjoyment that this creates is visible on the faces of the children and parents each Sunday morning, but equally as important is the part it plays in the longer term personal development of the youngsters.”

“ We are delighted that DWF have further strengthened their relationship with the Club by wishing to be associated with our highly successful Mini and Junior Section which is the envy of many Clubs not only in the region, but much further afield as well. Each season the section becomes more and more successful both in terms of trophies won and increased participation in all the age groups.”

“This unprecedented success has been recognised by DWF Solicitors, and their wish to further increase the support that they already offer to MRUFC, is testament to the hard work that all the players, coaches and volunteers bring to the Club each week. We look forward to a strong, healthy and long-term relationship with DWF, and would wholeheartedly recommend their services, knowledge legal expertise to all of our members.”