The amazing success of players in all ages of the mini, junior and youth sections reported over recent weeks continues with two of our U13 players being selected to represent the Independent Schools Northern division. Centre Tom Blackwell and open side Will Peakman pictured below, attended an all-day trial with 60 other boys at Ampleforth School. 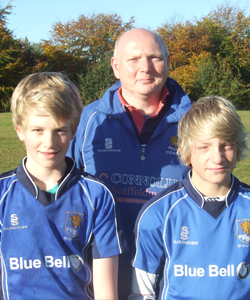 The standard of rugby was incredibly high and it is great testament to the lads themselves and their coaches that they were successful. They will now go on a short tour and then attend the national trials at Rugby School. Macclesfield U13 head coach, Elden Burke (pictured) said “we’re delighted for Tom and Will – we are building a really good team here and they are a vital component of it. Their success is down to good core skills but also their attitude and commitment both in games and to training” Chairman of minis and juniors, Tony King said “it’s great for the team and the club to have representatives at such high levels and it’s a fantastic endorsement of the work of the volunteer coaches who give up so much time. I wish Tom and Will great success in the national festival” Both boys were representing the King’s School in Macclesfield where one of their coaches for the year 8 side is a Macclesfield stalwart, Rick Jones.