Macclesfield Rugby Club is delighted to announce that one of our brightest junior talents, Christian Taylor, has been selected for the North of England Under 16s training squad. The announcement comes following the final North of England Under 16s trail which was held in Leeds on Sunday. Christian gained his place in the final squad along with 7 other Cheshire squad members from the successful team that won the Northern Championship in November. Macclesfield Rugby Club would like to take this opportunity to congratulate Christian on this significant achievement. 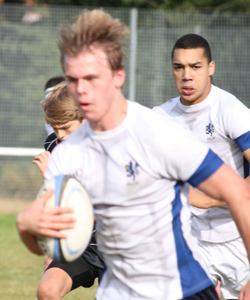 Mind you, Christian comes from a family that has had its share of success and achievement over the years. He is the youngest member of the Taylor dynasty. His father, Iain, was a former Macclesfield and Cheshire Captain; Uncle Dave was a regular at Sale in the 80’s; eldest cousin, Jack, still plays at Macclesfield; whilst youngest cousin, Tom, currently plays for Sale Sharks. His Grandfather, John, also played at Macclesfield, and was the Chairman of the Club and was County President a couple of season ago.

Christian attends Tytherington High School and has played at Macclesfield Rugby Club since the age of 7. He now plays for the Junior Colts (Under 17s).   He will now attend a North of England training weekend at the end of January, followed by a national development weekend on February 1/3 at Broadstreet RFC. There will be two matches at Broadstreet on February 3 with North v South West at 11am and London & SE v Midlands at 1pm. Training camps will then follow in February for the England Under 16 squad and the two sides that will take part in the annual Wellington Festival at Wellington College in Berkshire from March 30 to April 5. England Under 16s will also host Italy Under 17s and play Wales Under 16s in April. The dates and venues for these matches have yet to be confirmed.

Macclesfield Rugby Club would like to wish Christian every success at the Divisional Weekend trials.