Macclesfield picked up two bonus points against Old Albanians on Saturday in a narrow 28-22 defeat at Priory Park.

Tries from Matt King, Tom Davenport, Frankie Barker and Dave Marwick helped secure the points, however the absence of Captain Tom Eaton was felt as only one conversion hit the target. 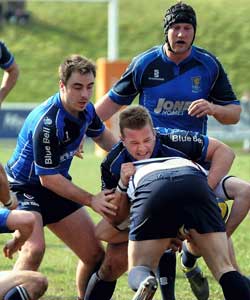 Head Coach and Director of Rugby Geoff Wappett was disappointed with the score-line, ““We went from winning 17-14 to losing 28-17 in a matter of minutes where we conceded two really soft tries.

“Defensively we still looked fragile and that’s been a common fault but we keep on working on it. If we defended a bit tighter then we might have been looking at five points and not two.”

Both sides enjoyed scoring opportunities in the opening five minutes; a good run by Lloyd Bickle was stopped by a big tackle from Blues flanker Dave Marwick, and good defending then led to a Macclesfield scrum.

Frankie Barker took the ball well from the scrum and nearly broke through the defence, however Old Albanians held strong and soon possession switched hands.

After seven minutes Billy Johnson was able to score for the visitors after finding the gaps in defence too easily, the conversion scored by experienced kicker and full-back Richard Gregg.

The Blues responded well, as Elliot Brierley went on a fantastic run down the left wing, fending off tackles as he went to bear down on the goal line. He offloaded the ball to winger Matt King who added his name to the score-sheet.

The two sides then exchanged tries once again; Johannes Lombaard scoring for Old Albanians as he dodged past the last man in defence. Gregg converted to bring the score to 14-5.

Stand-in fly-half Tom Davenport then scored for the Blues as he received the ball from a scrum high up the field, his momentum enough to carry him across the line. The conversion was off-target once again to make it 14-10.

The Albanians were denied a certain try just five minutes later, as rapid winger Ollie Marchon went on a fantastic run from the left wing through the centre, however his pass over the top of Macc’s defence was deemed to be forward and the Blues were awarded a penalty.

With just two minutes left until half-time, Macclesfield were able to capitalise on another scrum high up-field, and Frankie Barker tapped the ball down easily as the scrum surged across the opposition’s goal line.

Matt O’Regan scored the conversion to give the Blues a 17-14 advantage going into the break.

The second half remained scoreless for 15 minutes, as both sides struggled to break through despite good attacking play from Brierley, Davenport and Blues hooker Tom Cruse.

An error at a Macclesfield scrum gifted an easy try for Stefan Liebenberg who ran 30 yards untroubled to score down the right-hand side.

Gregg converted, and just two minutes later the Albanians extended their lead as Billy Johnson scored his second of the game.

At 28-17 Macclesfield were left reeling from a poor five minute spell that gave them a small mountain of a challenge to get back into the game.

When the Blues did finally add their fourth and final try to claim both the bonus points at the final whistle, it was left too late to affect the outcome of the result.

Substitute Jonny Kenny was able to intercept an Albanian lineout throw high up the pitch, and his quick offload to Dave Marwick resulted in an impressive try.

Wappett added after the match: “Old Albanians are a good side; they’ve got a very good fly-half, very good pace, and so consequently we did a very good job – a better job than I thought we were capable of apart from a bad five or ten minutes.

“But I thought we stuck to our guns, we did the things that we said we were hoping to do and we executed our intentions really well; apart from giving soft tries away and in many ways that was the difference between the sides at the end of the day.

“We stuck at it like we have done so often in recent times where we played right up to the final whistle and Jonny Kenny’s great lineout steal at the end set up a great drive from Dave Marwick to bring us two bonus points.

“Wharfedale got one point today so that puts us marginally ahead of them, so the survival instinct is still there.”

When asked about the absence of captain Tom Eaton, Wappett replied: “You can’t play without Tom and not miss him; it changed the nature of the way we had to approach the game. Tom Davenport did jolly well, I thought particularly with the ball.

“Next week we go away to a very good scrummaging team that play very well going forward; the setup of their team is pretty similar to ours.

“Our forwards have to be at the very top of their game next week. Blaydon’s recent results haven’t been quite as impressive as in the first three quarters of their season; they’ve tailed away a bit, but they’re still a good side so it’s going to be a tough one.”