Macclesfield did well to snatch two bonus points at the final whistle on Saturday against an in-form Old Albanians side.

Dave Marwick’s try at 79 minutes saved the Blues from walking away empty handed after battling it out against the team from Hertfordshire who now sit in fifth place. 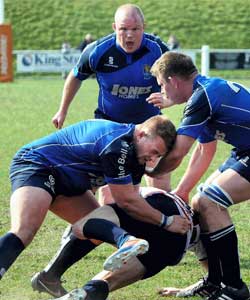 With the absence of game-changing players like Ed Stobart, Dean Williams and Captain & fly-half Tom Eaton it was always going to be a tough test, especially after last week’s disappointing defeat against Wharfedale.

The loss does not affect our chances of staying up as badly as some might fear, as 14th place Wharfedale also lost 32-31 against Tynedale, picking up only one bonus point in the process. Macclesfield now sit just one point above them while they are still due to play their game in hand.

Thanks to Twitter I was able to keep track of the score during the Albanians match, and in the last 15 minutes both sides took the lead twice as penalties proved to be the difference in the battle of the two Northern clubs.

In fact, at 79 minutes Wharfedale were in the lead with the score at 29-31 to the visitors; however a last minute penalty from Tynedale snatched back the win and saved Macclesfield from an even bigger challenge of staying in the National League One.

Next week the Blues travel up to Blaydon, who have been in inconsistent form recently, having lost four out of their last seven games. In fact the side from Newcastle were only able to beat bottom-of-the-league club Cambridge 27-23 back at the start of April.

When Blaydon came to Priory Park for the first game of the season they were able to put in a convincing performance to win 43-19.

This time round Blaydon are sitting safely in 3rd place in the league with nothing to lose or gain, while the Blues have everything to gain from a victory this Saturday.

Elsewhere in the league, Richmond, who come up against Wharfedale this weekend, were beaten 36-17 at home against Esher.

Fylde won 44-28 against Blackheath, while Sedgley Park were demolished 61-7 away at Coventry.

The unstoppable Ealing came up against Cambridge and walked away with yet another five point victory as they gear up to playing in the Championship next season, the final score 64-32.

Next week’s opposition Blaydon were beaten 34-27 by Rosslyn Park, while Loughborough Students won 41-36 away at Cinderford.

It was a fantastic weekend for the Macclesfield Lions as they won 53-5 against Fylde in their final game of the season to clinch the league title – a feature will be coming soon about their success this year.

The 3s and 4s both came up against their respective Trafford Metovick teams, the 3s winning 45-10, while the 4s lost 36-18. The Vets were without a game.