The Senior Colts ground out a narrow win against Winnington Park in horrible conditions, driving wind and rain putting paid to any attempts at running rugby. Macclesfield edged the contest with stouter defence and conversion of the one real chance that came their way. The back row played their part forcing turn overs and making the breaks. Charlie Davies regained possession at crucial times and George Hodkinson earned the man of the match plaudits for his harrying and tackle count. The midfield partnership of Cam and Joe also tackled keenly, stopping anybody who tried to get through their channel. 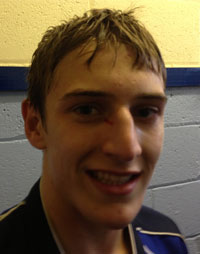 A scoreless first half saw possession and territory move to and fro along the pitch, depending on who could hang on to the ball in the slippery conditions. Ollie’s touch finders from penalties provided the best opportunities to make some headway from an attacking lineout, but the Blues were unable to capitalise.

The Colts started the second half brightly, getting close to the opposition line, keeping the ball alive down the right hand side. Dan was imperious in the lineout again, securing the ball in difficult conditions. Half way through the second half, the Colts finally made the breakthrough. Ollie hoisted a free kick into the opposition’s twenty two. The ball bounced behind the defending winger, Lloyd was first to the bounce, but looked like he had knocked the ball on. Lloyd’s dive collected the ball just before it touched the ground, as he landed, he slid into the in-goal area for the try.

Ollie converted for the valuable extra two points. Park then pressured the Macc line for long periods, but resolute defence kept the opposition at bay. George kept tackling hard, and Charlie was first to the ball after the tackle to win crucial penalties to enable Ollie to clear the lines. Lloyd’s punt into the dead ball area finished the game, to the relief of the travelling support and players alike.