Any supporters expecting a bit of a drubbing at the weekend’s game at Priory Park, probably left the ground scratching their heads. Macclesfield Blues came away with another bonus point victory, but the final result was certainly not what many had predicted. In truth the score line of 43- 34 wasn’t exactly an accurate reflection of the game they had witnessed. Yes Bromsgrove did put up a spirited fight, but Macclesfield Blues were undoubtedly the superior side and fully deserved their win. So, were Bromsgrove better than they’d been given credit for, or were the Blues guilty of taking their foot off the pedal when they though the game was won? Well, in the opinion of Head Coach and Director of Rugby, Geoff Wappett, the answer is the latter. Macclesfield Blues lost concentration and focus at critical points in the game, and against tougher opponents than Bromsgrove, that could prove to be costly. Here Geoff reflects on the weekend’s bonus point victory and looks ahead to the visit to Chester. 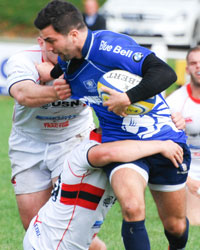 So great result against Bromsgrove, are you satisfied with the way things turned out?

“Well, what can I say? 5 wins and 5 bonus points – it doesn’t really get a lot better than that at this stage of the season. So yes I’m satisfied.”

Did Bromsgrove have more to offer than you were expecting?

“Well, I’m not too sure about that. In some ways we were our own worst enemy. We gifted them a start from the kick off and were 7 -0 down in a matter of minutes. Once we got over the shock we snapped into gear and scored 3 quick tries. I have to say though, for the all the attacking flair we show, we’re possibly at our weakest when we feel that we are leading comfortably. When we went 3 tries to 1 up we lost some of our concentration and that allowed Bromsgrove back into the game. The result was that we went in at the break 20-15 down.”

“Although the score line didn’t paint an accurate picture of the way the game had panned out, it did re-focus our concentration. We knew that when we came out for the second half we didn’t need to chase the game. We have enough quality available to play to our strengths, and when we do that we know the opportunities will come without forcing them. So we rolled our sleeves up and set about getting the job done. In the space of 20 minutes we took control of the game and scored 4 good tries to effectively put the game to bed. Of course at 43-20 we switched off again. I don’t know whether we took our foot off the accelerator or just lost our concentration, but whatever it was we let them in for a couple of more tries which to some extent took the edge off the result.”

“Never the less we played some good stuff. We scored 7 tries and even managed to convert a few this time too. What we need to do is sharpen up a little. We’re playing well, but there’s no point knocking teams over if you’re going to allow them to get back up again. What we need to do is stay concentrated and focused and the results should follow. This coming weekend we’ll definitely need that concentrated focus against Chester, or we’ll suffer the consequences.”

Chester are playing pretty well at the moment, will this be the sternest test for the Blues so far this season?

“In some ways this game couldn’t have come at a better time. Having been conscious of our weaknesses over the last few weeks, we know we have to play to our best to get any sort of result. I’ve said before and I’ll say it once more, we play our best rugby when there’s a bit of fear in our game. The fear-factor focuses the mind and ensures that you can’t afford to switch off. Without that fear we have a tendency to become a little bit sloppy and complacent. Chester’s good run of form will mean that sloppiness is not an option.”

“What I can guarantee is that this weekend we’ll be made of sterner stuff. We’ll retain all the good aspects of our play to date, but we’ll also tighten up and strengthen our defensive line and maintain our concentration. Although Chester have won 4 from 5 games, it’s still too early to judge how good a team they are – or we are for that matter. The results so far are simply an indication of the teams you’ve played. If you’ve played weaker teams you’re record looks good: if you’ve played the top teams your record might not look that clever. So at this stage of the season we set no store by the league position: we’ll simply concentrate on our own game. Chester may have won 4 out of 5, but they came up short against Sedgley, one of the stronger teams at the weekend. Does that tell you anything? Well no, other than Chester will have a point to prove when they play us. They’ll want to put matters right, and that means we know we’ll have a game on our hands.”