Winnington Park kicked off the match hoping to take advantage of the low sun in Macclesfield’s vision. The first ball was caught cleanly, however, and within the space of 10 seconds the ball reached Tomasz at outside centre who broke 2 tackles and outpaced the defenders to score under the posts. The muddy conditions meant a lot of ball was being spilt by both teams but at the scrums the pack were in total control and James W was winning every ball no matter who had the put in. 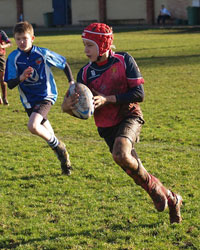 James was also making a nuisance of himself at the front of the lineouts, bravely falling on any loose ball to allow Danny at scrum half time to consider his attacking options. Another break by Tomasz saw him through to the line where he passed to Will for the touchdown. Further Macclesfield attacks near the WP lline eventually resulted in a quick tap penalty that zipped along the line where Tomasz once again scored a try.
WP responded by moving around some of their big tacklers to cover the holes in their three quarter line but more slick passing followed by an excellent direct line of runing from Harry O from the WP 22m line breached the defence for an excellent try.
WP were finding it difficult to maintain any attacks because of the cover tackling and they soon found themselves under pressure again having presented the ball to Will standing at centre in the middle of the pitch. Wil saw the gap, cut back inside and layed a nicely timed pas to Eden, runing at Will’s shoulder who scored in the corner.
The WP team seemed to respond positively from this latest set back and their pack started to gel pushing the Macc forwards off the bal at the rucks and stealing Macc ball at the mauls. Some heroic defending from the Macc players meant their line was not crossed and the final score was 33-0 to Macc U13s.
Scorers:
Tries, Tomasz(2), Will, Harry O, Eden
Conv, Will (4)