Anyone who has known or worked with former Head Coach and Director of Rugby Geoff Wappett, will know that he could never be described as a shrinking violet. Nor will they have witnessed many occasions when Geoff was lost for words. Well, last week’s Player’s End of Season Dinner was one of those rare occasions. Perhaps it was the finality of the occasion, or maybe it was simply the emotion of the evening, but Geoff felt that he didn’t manage to say all that he wanted to say. So, when we caught up with Geoff earlier today, he asked us to pass on this final message to everyone at the Club. 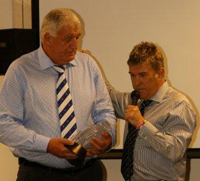 “The Players End of Season Dinner was a great evening. The people who organised the event deserve great praise, as the evening was very well organised and professional. It was, I believe, the first for the last 8 or 9 years or so. I really hope it now becomes an annual event, because it was such a success. The Club presented me with a fantastic trophy to mark my time at Macclesfield Rugby Club – a beautiful blue engraved cut-glass rugby ball on a kicking tee. It’s an absolutely fantastic memento, and it’s something I will always treasure.”

“Naturally I thanked as many people as I could on the evening for the beautiful gift, but it’s only afterwards that you get sufficient time to reflect and focus on some of the other people you should’ve thanked and some of the other important things you probably should’ve said. Hindsight’s great for that, isn’t it! I suppose I was just a little overwhelmed by the occasion, and maybe even a little embarrassed by some of the kind things people said about me and my time at the helm of the Club.”

“It’s not often I’m lost for words, but this was one of those occasions. I suppose the realisation that this was the last time I would speak to the players and officials, and the fantastic gift just overwhelmed me a little, so I just concentrated on thanking the players on the night: it was a their evening after all. But now I’ve got another opportunity I would also like to thank many other notable people at the Club who have helped and guided me throughout my time here at Macclesfield.”

“I would firstly just like to say how much I’ve enjoyed my time at the Club. I’d like to single out the old committee of Clive Hammond and Alan Johnson for special thanks. They both gave me considerable help and support when I first came to the Club: support that has since been continued by Peter Harper and the rest of the current committee. I’d also like to thank previous captains for their support, and would single out Tom Eaton for special praise. He’s done a remarkable job liaising between myself and the players. Finally I’d like to thank the supporters. They’ve stuck with us through the good times and the bad, and their unstinting support has been truly appreciated by everyone at the Club.”

“What I’m especially proud of in my time here is how we’ve all worked together for the common good of the Club. Everyone has played a part and I’m proud that we have collectively managed to build what I would call a real rugby club. We’re all in it together: first team, second team, thirds and fourths along with the Colts and the Juniors. Sadly I feel there too much emphasis on professionalising rugby these days, and far too much effort focused solely on the first team. Real and honest rugby clubs are representative and speak for the whole of the local community, and Macclesfield Rugby Club definitely ticks both of those boxes.”

“I’d just like to end by saying that I am truly proud to have been a part of Macclesfield Rugby Club, and I send my best wishes to everyone at the Club.”