Macclesfield began their pre-season campaign with a 34-26 win over Caldy at Priory Park. The game was Giles Heagerty’s first at the helm and Mike Finnemore’s first as captain.

The Blues began the game at a blistering pace and had a try ruled out after a matter of seconds for a forward pass. Although Macc were denied this first score it was not long until they had a legitimate try on the scoreboard. Macclesfield’s long serving Tom Eaton putting debutant winger Josh Fowles in to score. 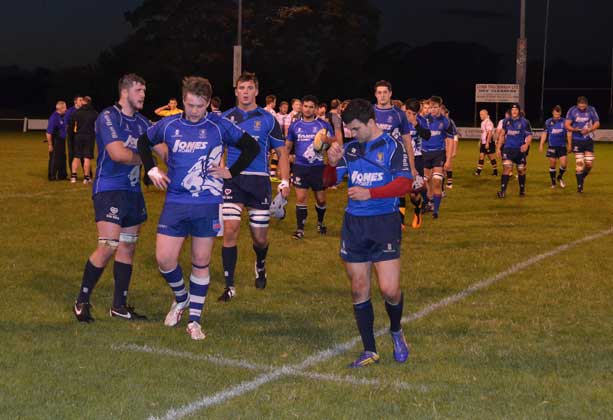 It did not take long for Caldy to get a try of their own as they fought back against the Blues; a well worked backs move from a line out saw them cross the Macclesfield try line, leaving the score at five all after 10 minutes.

After a quarter of an hour Macc scored their second of the game, and what a try it was! Winger, Matt King made the initial break, who gave it to new boy Ollie Fewtrell, who provided a superb offload for Jonny Kenny to breeze in under the posts. 12-5.

The Blues then had a long period of defence to go through where Caldy put good pressure on their line but the Macc defence was strong and stern, they eventually came away with the ball.

It was then turn for Macclesfield to show how clinical they can be when given an opportunity in the opposition half. A fantastic solo effort from Elliot Brierley saw him out run the defence and dance over the line. The Blues were on the score sheet again not long after a quickly taken penalty saw them take the score to 22=5 after 32 minutes.

Caldy replied on the stroke of half time as their winger barrelled his way down the blindside to get Caldy back into a game which was sliding out of their grasp, leaving the score 22-12 at the break.

Caldy came out after half time and started well, they got another try just four minutes in, taking them to within three points of the Blues.

The game then became scrappy as both sides began to make changes.

Caldy were to score next and take the lead through some more impressive backs play.

Macclesfield then came back into the game and really started to put pressure on the Caldy defence, this pressure began to show with the visitor’s penalty count rising a yellow card was the result. Caldy were defending well until another man was sent to the bin.

It was not long until Macc made the extra man count, young prop Elliot Mills crossed on debut to make the score 29-26 with just over five minutes to play.

There was still time for one more Macclesfield score under the lights at Priory Park, Chris Jones crossed from the back of a typically strong catch and drive line out. This was the last of the action, leaving the score at 34-26 to the Macclesfield Blues.