What’s the dream of every young rugby player? Well, most people would probably say it’s to take part in training with the best coaches in the land, and experience what life really is like for a professional rugby player. Most young players might dream about it, but few actually get the chance to experience it and live the dream. However, the opportunity of a lifetime was given to two young Macclesfield Rugby Club Under 16s second row players – Sam Worthington and Jack Hudson, courtesy of new Macclesfield Rugby Club sponsor, Halliwell Jones. Thanks to the generosity of Halliwell Jones these young players and family members were able to spend the day training with England Head Coach Stuart Lancaster and skills coaches Graham Rowntree and Mike Catt at the BMW Ultimate Performance Event in Nottingham earlier this month.

The BMW Ultimate Performance Events originally started in September, 2012, when BMW and the RFU announced a ground-breaking four year partnership to help develop the next generation of English rugby talent through the BMW Performance Academy. The philosophy behind the initiative was that by supporting players from the age of 15 through the journey to the senior squad, BMW could help to shape the future of England Rugby. The purpose of the BMW Performance Academy was to identify the key players of tomorrow and support their development, in order to ensure the future growth and sustainability of the national team. 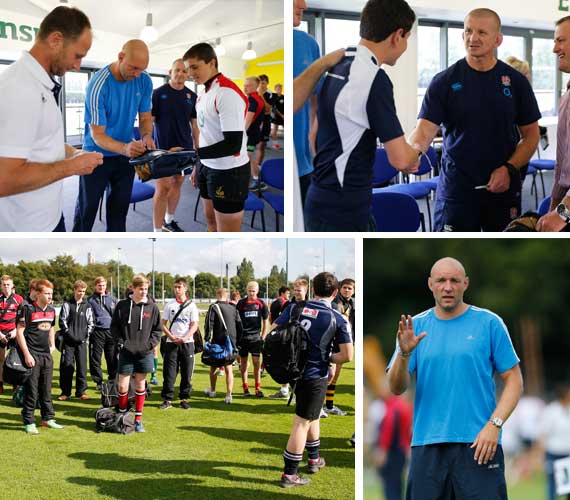 Were Sam and Jack excited to hear the news that they’d been chosen to represent Macclesfield Rugby Club at the England training camp? You bet they were. Were they overawed by the prospect of demonstrating their skills in front of the top coaches in the country? Definitely not: on the contrary, they couldn’t wait to get stuck in and were relishing the experience. How did the day go? Well, the boys are best placed to answer that. Here’s what Sam thought of his experiences:

How were you and Jack chosen?

“Originally Macclesfield Rugby Club were offered a position on the training day with England by BMW. To make it fair the Club chose the name out of a hat. In the end BMW said that the Club could take two players to the training day, so me and Jack Hudson were chosen. Obviously we were both very excited to be told the news, and couldn’t wait for the day to finally arrive.”

How did you enjoy the experience?

“I had a fantastic time. It turned out to be a really good day for me, and for my mum and dad who came with me. I was really excited about training with the England coaches and was really looking forward to the experience. I suppose I was a little disappointed when they told us on the day that there’d be no contact, as I like the contact part of the game, but as I got into it I realised that it was still a fun experience anyway. The main focus of the day was on touch rugby and ball skills. I guess I learned a lot about defence and especially about spatial awareness, both of which can only help to improve my game.”

What do you think you learned from the experience, and what will you take away from the day?

“At Macclesfield I’ve mainly been playing prop, though over the last year I’ve also spent a bit of time playing second row. So I’ve concentrated principally on getting better in that position up until now. What I learned from the day is that I shouldn’t get tied down just playing one position, and should be open to learning to play in different positions and adding more flexibility to my game. The coaches told us that what we should be concentrating on is learning new techniques and trying to broaden our overall rugby knowledge and experience because even though we were both currently playing in the second row, there’s no guarantee that’s where we’ll end up playing eventually.”

“They encouraged all the players to try different things and told us not to concentrate solely on what we were already used to. They said that learning more about different positions would make us better overall players. So the main focus on the day was on trying to develop a broader and more varied skill set. They encouraged us to kick and pass more, but warned us that we should save that for when we were practising: they warned us not to use the experience as an excuse for kicking and trying fancy moves when we next play competitively!”