The Macclesfield Under 9’s triumphed (jointly with Lymm) at the first festival of the season in Stockport. The weather was great and the lads started in the group stages nervously, however they soon found their form, attacking hard, and defending well with shape and determination. Some creative passing play combined with a disciplined line in the defense saw the Under 9’s top their group. 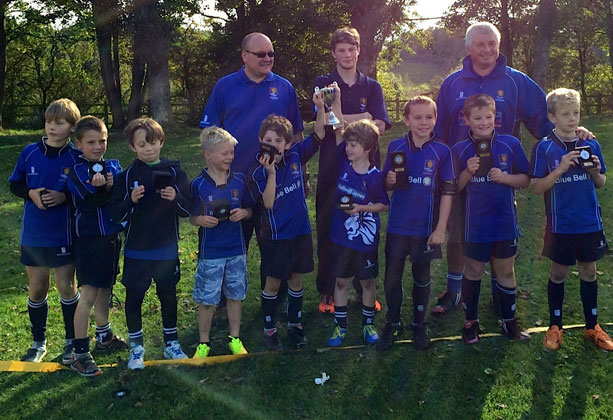 The semi final (Macclesfield .v. Sandbach) was a level up from the group stages! Macclesfield started well, scoring the first try which would become crucial! Both sides put on some excellent, and highly competitive rugby with big hitting tackles and fast play. nothing would separate them finishing in a 4 – 4 draw! However the rules stated the winner was the team scoring the first try!

The final beckoned and Lymm were the target. Both sides eyed each other up across the pitch, working out who was who. Macclesfield started well, defending against the Lymm onslaught. After a spilled ball, Macclesfield very nearly went over however Lymm’s defense held out and we got turned over on the 7th tackle! Lymm pushed hard into the Macclesfield half, but nothing could separate them and at the oranges it was 0 – 0.

The second half saw both sides taking 7 try turnovers, and some really hard tackles. The attrition rate was high on both sides with several crunching tackles. Technique became important and Macclesfield stepped up to that mark. Realising that the first team to go over would win it, the determination from all the lads was incredible. In the end nothing could separate the teams and the match finished 0 – 0! The rules meant that both sides shared the Cup.

A fantastic day, and the lads were exemplary ambassadors for the Club, wearing their badge with pride!

SPECIAL MENTIONS (IN NO ORDER)

Oli Carter – Bravest on the pitch

Ethan Mason – Smashing through and offloading at the right time

ALL equally Man of the Match!!