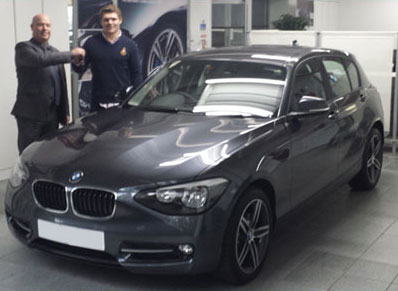 Elliot, who has great experience plying his trade at both inside and outside centre has become a versatile and valuable player for Macclesfield Blues in the short time he’s been with the Club. Elliot popped down to the showroom last week and chose a brand new BMW 116i Sport in Mineral Grey. Speaking at the handover, Jonathan Marsh, New Car Sales Manager, commented:

“We are delighted that Elliot has chosen Halliwell Jones to provide his new BMW. Our partnership with the club presents an exciting opportunity for Macclesfield RUFC, its players, supporters and Halliwell Jones along with its customers and staff.”

The Halliwell Jones Group has grown from a small family-run business with a staff of 15 operating out of Southport, to a respected company with 500 members of staff operating in Chester, Warrington, The Wirral, Llandudno and Southport. It operates the BMW & MINI franchise in the North West of England and North Wales, and acquired the Wilmslow BMW and MINI Dealerships (formerly Blue Bell Wilmslow) in March this year.

Halliwell Jones Wilmslow is currently sponsoring Macclesfield Rugby Club for a period of two years, and visitors to the Priory Park home ground will have noticed there is now a Halliwell Jones Stand offering support as well as showcasing the latest range of vehicles. They’ll also have noticed that since the start of the season Elliot and other team members have been wearing the Halliwell Jones BMW logo on their rugby shirts.