Despite being in the game until half time, and scoring 3 superbly worked tries during the match, The Blues ended up on the end of a second half onslaught and also lost influential skipper Mike Finniemore with a shoulder injury.  In a `must win` game against a team in the bottom half of the table, The Blues struggled to secure enough ball to be able to control the game and came up against a side hitting some form (4 wins on the bounce) and conceded 3 late tries to give the visitors a flattering final points haul.

Now is the time to get behind your team and give them some much needed support, with the next home match on December 6th against Wharfedale.  Due to the way the fixtures have fallen, this will be the last home for 4 weeks until Esher visit Priory Park on 3rd January, so please make the effort to come and get behind the team.

As mentioned, The Blues went down at home to Old Albanian, The Lions won away at Caldy in a close encounter 25-29 (there were 3 of the Taylor family in the starting line up! Fred Taylor, son Christian and Jack – Fred`s nephew), the 3rds won away at Liverpool St. Helens where they beat LSH 2nds by 38 points to 5, the 4ths/Vets had another much needed rest whilst the Colts came unstuck at home to Southport 12-15.

The Blues travel up to the Northeast to take on Blaydon, The Lions have a day off  for Christmas shopping, the 3rds and 4ths/vets are both at home (2.15 kick offs) and play Toc H 2nds and Sefton 3rds respectively.

If you or your child are playing rugby or football at Macclesfield RUFC, then you need to pay your annual subscription. This is now OVERDUE and we will be cracking down on those who think they are OK to play without paying – please contact Bev at the office or pay online NOW if you haven`t already paid.

NEXT HOME GAME FOR THE BLUES

December 6th sees Macclesfield Bluse play host to Wharfedale in another `must win 8 pointer` – kick off 3.00. Come down and support your club for what will surely be a fantastically competitive game of rugby between 2 teams at the wrong end of the table. The Christmas Lunch is almost sold out and the atmosphere should be electric!

To help raise much needed funds for the club, we will be holding an auction at the lunch, 1 of the items being a fantastic limited edition (Number 15 of 125) rugby ball to celebrate Leicester Tigers 125th Anniversary. Signed by 15 of the greatest players of the club. Names include World Cup Winners & British Lions legends Martin Johnson, Martin Corry, Clive Woodward and Neil Back. There are also other International and Lions Players. Comes in a presentation case with certificate of authenticity.

If you would like to make an e-mail bid, please do so by sending your bid to; peter@maccrugby.co.uk.  The ball will then be auctioned at the lunch on 6th December with the highest bidder (be that on the day or e-mail) being succesful.  This is the chance of a lifetime to own a real piece of rugby history so don`t lose out………….put in your bid before the 6th December, but remember – if a bid on the day is higher than yours, you will lose out, so put in the best offer you can!

Huge Thanks to Mike Keeling who has very kindly donated this fantastic prize……………Cheers Mike, really appreciated.

Macclesfield RUFC is heading swiftly towards it`s 140th anniversary (founded in 1877) in 2017 and has a rich and interesting history.  As other clubs have, it would be great if we were to have a `Club Historian` to gather information, pictures, memorobilia etc and put together something in time for the 140th anniversary.  Whilst this may seem a daunting task if taken on by one person, it may be an interesting, exciting and rewarding project for a group of people.  If you feel you could assist in any way, either by being part of the team or providing information etc. please advise me in the first instance and hopefully we can put something together.

Anyone know what this photograph is about? 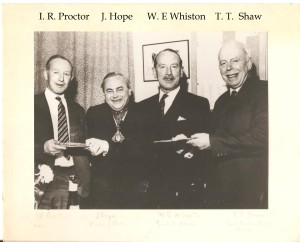 The 3 lucky winners of the November 200 club draw are;

When I saw the list of winners, I thought I`d gone back in time to the clubhouse at Tytherington and the 1970`s!!

On an overcast dreary Sunday morning Macclesfield Rugby Under 7’s entertained Stockport at Priory Park. Macclesfield had 5 teams to Stockport’s 4 so a round robin of tag games commenced at 10.30am. It was immediately apparent that the defence focussed training session from the week before had really helped Macclesfield get organised. Stockport were finding it difficult to break down Macclesfield’s defence and all teams were tagging relentlessly forcing Stockport into making errors. Macclesfield’s finishing was also ruthless particularly Cillian who scored 3 quick tries in the first couple of minutes of his game. As the games progressed through the morning it was apparent that Stockport had some great players and were scoring some fantastic individual tries but lacked Macclesfield’s teamwork and cohesiveness which meant that by the end of most games Macclesfield were ahead. Pitches to play on as ever are a problem having no line markings is far from ideal and with one of the pitches fairly waterlogged it soon turned into a mud bath and became almost unplayable despite it being very early in the season. There were some fine displays on Sunday Austin was excellent again and Harry Boyd and Oliver Curwen are really increasing in confidence with each game which is great to see. Stand out performances though came from Ben Ainsworth (Player of the Week) and Alfie jennings  (Performance of the Week) who were both excellent in attack and defence throughout all the games.


UNDER 10`s TRIP TO SEDBERGH

On Sunday 23 November the MRUFC Under 10s sent 12 boys to Sedbergh School to play some of the best clubs from Cheshire, Lancashire and Yorkshire. The setting was fantastic, the bright and crisp Autumnal weather perfect for rugby. The festival was in a league format and our league consisted of Waterloo, Wharfedale and Stockport.

We started off against Waterloo and lads were fired up and focussed from the off. We ran out 10 – 0 winners with a dazzling display of attacking verve and tackling prowess, with 2 tries from Sam Davies. Our second game, against Wharfedale, ended up 20 – 20 with some riveting end to end rugby, with both teams pushing for a late winner. Our try scorers were Matthew Whylie (2), Sam Davies (1) and Haydn Keogh (1).

After a two minute break, we were straight back on for our final game which we lost 0 – 15 to Stockport. At one point we had 3 lads substituted & sitting on the touchline with various injuries, nursing ice-packs and wearing slings and the victory proved a step too far.

Great attacking play, good passing and solid tackling were evident from all the boys and we’ll be working on rucking confidence over the next few weeks. Every one of the 12 boys selected to attend did themselves, the rest of the Under 10 squad, their dad’s and their club proud.

The night was well attended with loads of prizes won on the night and after a tie breaker question, the winners were Matt Harding & Dave Marchington`s team

Thanks to all who supported and organised the night……………..who is going to take the crown off Matt next year !!! 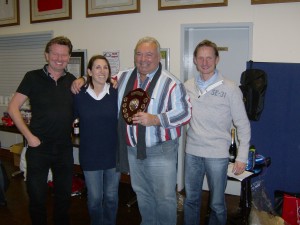 Saturday March 7th has been booked for the innaugural Mini/Junior day where the pre match lunch will be handed to the MJ section.  We`d like to make this an annual event to look forward to, so if you have any suggestions, offers of help etc. please contact Ange or Rob Oliver

It’s been said that with a great (and not so great) moustache comes great responsibility. I’m reaching out today with hopes that you’ll donate to my moustache so that it may grow just that bit more. I’m passionate about Movember because they are working tirelessly every day, connecting and funding the best scientific and clinical minds in the world, working towards two urgent goal: fast tracking a time when no man will die from prostate or testicular cancer, and to rid the world of discrimination against men and boys with mental health problems. You can donate by: Donating online at http://mobro.co/2862557 -OR- Writing a cheque to ‘Movember’, referencing my registration ID: 2862557 and mailing it to: Movember Europe, PO Box 3, Diss, IP98 1HH You can learn more about the important work and impact Movember is having at: http://uk.movember.com/programs There’s a lot riding on this moustache, so thank you and I appreciate your support.

Please please give as little or as much as you can

Thank you very much in anticipation of your generosity 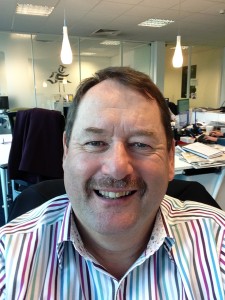 As part of our plan to make the Rugby Club more `Family Friendly` we have recently installed Baby Changing facilities at the club. There is now a changing table located in the disabled toilet by the front entrance to the club. Please feel free to use this facility, but dispose of nappies, wipes etc in the bin provided, not down the loo! 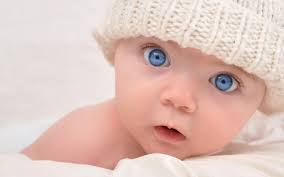 If you have booked a place at the Christmas Lunch and not yet paid, you`re place is in jeapordy!!  Please pay by Friday 28th otherwise your place wil be sold to someone on the waiting list.

We will shortly be distributing the RFU raffle tickets for EACH AND EVERY MEMBER TO SELL. 90% of the takings – potentially £9,000!!! – goes to the club and ALL MONEY raised will be allocated to a specific project to improve the facilities at the club NOT TOWARDS PLAYERS WAGES as is a popular misconception. We are in desperate need of funds to prolong the life of the astro turf in order that it can keep producing much needed income for the club. The newly laid pitches require better drainage and care. To repair the astro turf and upgrade the playing pitches will cost in the region of £6,000…………… We average around £3,000 each year in ticket sales, (which means only 1 in 3 of our members are pulling their weight) and need twice that to carry out these essential works. Please ensure you sell your allocation as you can see how desperate we are for the money.

Paul Bartle (club member and teacher at Kings School) and Fred Taylor (2nd team & Colts coach) are organising a try festival for Tuesday 23rd December when a Macclesfield Select take on a Kings Former Pupils team under the lights at Priory Park. It will fun, fast & furious! Kick off time and final details to be decided, but put in your diary now!

Please feel free to e-mail any news, items etc. related to the Rugby Club (to; media@maccrugby.co.uk) and if appropriate, I`ll be happy to add to this column.

On his third tour @StuartWHOGG_ will make his @lionsofficial Test debut tomorrow... If you were in any doubt what it means, watch this clip from his interview with @Sarraelgan. Full Feature 👉 trib.al/M68uRFG

🇿🇦 How will the @Springboks try to beat @lionsofficial? 🏆 As a @rugbyworldcup winner, @BobSkinstad might have a few ideas #LionsSA2021 | #TheWrap

John Mitchell will step down as England Defence Coach to take on a new position at @WaspsRugby. More on our website 📲 bit.ly/3zs6s7X