Macclesfield Colts second half haul of seventeen unanswered points secured a well earned victory against visitors Waterloo, despite falling behind to an early converted try. Encouraged by Man of the Match Sam Black’s direct running, the comeback started with a Tom Leicester penalty conversion. Mike Green finished off a sweeping move for the Blues first try after forwards and backs had swapped passes down the right wing. Maintaining their momentum in the second half, the Blues pulled away with a score under the posts from Ben Hadfield. Quick hands through the backs set up the final try for centre Callum Davies, as he exploited an overlap on the right. A last minute penalty from Ollie Aston put the gloss on the win. 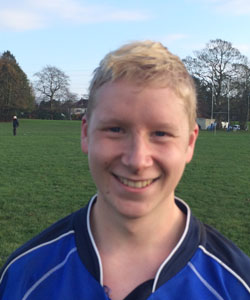 Harry’s grubber kick behind the Waterloo defence , followed by a footrace to the ball in the in goal area, was all the Blues had to show in the early stages of the game. A big clearance kick by the Waterloo flyhalf put the opposition into the Macclesfield half for the next quarter of an hour. A mix up in defence, let the opposition winger in for an early try, which was converted well. The Blues showed signs of their ambition, running the ball out of defence, Mike making good progress down the right wing. Some territory was gained, then Tom had an opportunity for a penalty after Waterloo wandered offside. Another run out of defence, started by Scott and Sam, led to some slick interchanging of passes between Mike, Charlie, Matt and others down the right wing. Great support culminated in Charlie popping an inside pass to Mike who slid over the line for the first try.

The second half was more productive for the Blues. Ben made the hard yards, with a number of bullocking runs, one of which ended in a try under the posts, after he took a pass out of the back door from Tom in midfield. Aled was called for in defence, making a mark and keeping penalty kicks in play with some adept catches. A combination of territory gained by Ollie’s penalty kicks to touch and Callum W and George harrying their opponents kept the Blues moving forward. A catch and drive from a lineout looked to have got over the line, but the referee was unsighted. Undaunted, the pack won the next five yard scrum and Harry moved the ball wide. Quick hands got the ball to the centres, Charlie passed to Callum D who dived over for the score. Ollie converted well from out wide. With a couple of minutes left on the clock, the Blues knew they had to play the game in the right areas. This they managed to do, winning a penalty in the process which turned out to be the last kick of the game, for the second week in a row.