Blues’ towering stalwart Williams is off to the Land of the Long White Cloud.

Giant lock forward Dean Williams is moving onto pastures new as he adventures down under to ply his trade in Auckland.

Williams heads for the southern hemisphere to join the Suburbs, playing in their local premier grade rugby.

The 7ft 2” monster stands above his peers and tends to lead by example on the pitch since joining the club.

‘Deano’ has been both promoted and relegated with the Blues, and so has experienced the highs and lows on rugby with Macclesfield after signing from Sedgley Tigers.

“My time with Macc has been pretty up and down,” he admitted. “But it’s certainly enjoyable on and off the pitch.

“It’s a great club with great people involved at all levels, it’s been a pleasure to be a part of it and of course I’m going to miss it.”

This season – with the club back in National League One after last year’s title-winning campaign – has been tough for the Blues, and has left Williams frustrated with some of the luck they have experienced, but he is confident they are yet to cause some upsets before the season is out.

“We must just keep playing our rugby to the highest standard we can, and then we’ll see where we end up.

“We’ll surprise a few people yet this season.

“We’re definitely a very good side. We’ve been very unfortunate with injuries but sometimes that’s the way it is.”

Williams will play for Auckland Suburbs out there and is relishing the new challenge; he expects it to be a rather different brand of rugby out there and knows he will have some work to do on his own game.

“I expect the rugby to be very tough, the game will probably be a lot quicker out there than it is over here,” he added.

“My fitness will need to come up a bit, but I’ll certainly enjoy the challenge.”

Williams was very thankful to his new club, who are helping him find his feet in foreign land as they have helped him to find accommodation and work while he is out there.

The Suburbs have produced 10 All Blacks in the past, including 100-cap man and scorer of 33 international test scores, Mils Muliania.

They also produced Craig Dowd, a prop who was capped 60 times and made more than 100 appearances in England for London Wasps.

The Blues’ head coach, Giles Heagerty speaks very highly of ‘Deano’ and said: “Dean has been a huge asset to Macclesfield rugby, not just in stature, but in all he has done.

“There’s no doubting the talismanic value he brings to the team alongside his physicality, and he will be missed.

“What has impressed me the most is his dedication to training and his consistency in always wanting to improve as a player.

“We wish him all the best.”

The rings of ‘Deano’ that accompany his bruising ball carries will be missed around Priory Park, but everyone at the club wishes him every success.

Deano was presented with  a commerative award of his time at The Blues’ by Chairman Peter Harper. 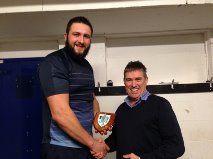