Blaydon were the visitors on Saturday and they left Priory Park mightily relieved to have come away with the points. Yet again a gritty, determined Blues performance saw them fall just short and prompted comments from the opposition of `I can`t believe you`re bottom of the league`(again!!).  The start of the second half resembled the `Siege of Mafeking`with a relentless 20 minutes of Blaydon pressure, particularly from their powerful pack pounding away at the Blues line. However, the Macc lads  defended heroically and kept the visitors out with tackle after tackle flying in on the attacking hordes, with skipper Mike Finniemore yet again, leading by example.

With the visitors sustained pressure ending eventually in a turnover for Macc, the home side almost snatched victory late in the 2nd half with a period of continuous pressure themselves, but were unable to take the chances created.  Mike Finniemore was singled out as the Claphams Landscapes Man of the Match by Blaydon President, Bill Locke for his leadership qualities and tenacity throughout the 80 minutes.

The Lions continued their pursuit of the League title with a win away at Caldy by 36 – 5 (at one stage, the Lions were down to 12 men on the pitch), the 3rds maintained their lead at the top of the table with an emphatic win at Warrington by 40 points to 18.  The 4th team game saw a final appearance in a Macclesfield shirt for club stalwart Mark Marshall, who has had to retire due to upcoming surgery (or because he`s due to get married soon!) and his team mates ensured it was the perfect send off by beating Heaton Moor 2nds 17 – 12.  On Sunday the Colts lost 24 – 31 to Altrincham Kersal.

Easter weekend sees The Blues, Lions, 3rds and Colts  having a day off to hunt for Easter Eggs, with only the 4ths seeing any action when they entertain Oswestry at Priory Park, kick off 2.15

Apologies, should have gone in week ago

Macc entertained a very strong Bowden side in the Semi final of the Cheshire Cup, Bowden just got piped in the final last year so we knew we were in for a hard game. The weather suited Macc’s style of play and were also able to pick from a full squad. Macc were first to score after some sustained pressure, Harry Harding forced his way over for the try, Bowden immediately scored after some excellent play from their backs releasing one of the 6ft + wingers (yes they had 2 wingers 6ft+) to score a superb try.

With the scores tied Macc changed there defensive formation and played the rest of the half in Bowden territory. The forwards were dominating the scrum, James Walton, Connor & Harry W  were winning ball against the head and the second row powerhouse of Meredith & Harding were pushing Bowden off their own ball, this allowed the Macc back row of James Oliver, Sean & Lewis to make some good gains. After continued pressure tried were scored by Lewis Halliday, Harry Wheelton (who played the best game he has played this season) & Harry Harding. Not to be outdone the backs also contributed to the score line with Danny Brigs touching down. Will Davies & Harry Oliver were kicking conversions from everywhere!

Macc turned round 25 points up with the slope and the wind in the favour, again a slight change to the game plan meant that most of the second half was being playing in the Bowden half, the backs were running well with Will Davies releasing the impressive centres of Ross McGlone and Harry Oliver to make real inroads into the Bowden defence. The forwards were getting on top with great work by James Oliver, Sean and Lewis in open play alongside the powerhouse of Harry Wheelton and Connor. This forced errors from the Bowden defence, Will Davies kicked the resulting penalty (our first this season !) This allowed the back 3 of Toby Moule, Tomasz and Danny Briggs to make some great runs. Additional tries were scored by Tomasz, Harry Oliver, Harry Wheelton, Toby Moule with conversions by Will Davies and Harry Oliver

Bowden never gave up and were a credit to the club, Macc played very well putting into practice all the training ground work and were deserved winners by 10 tries to 1. Macc now face the old enemy of Wilmslow in the Cheshire Cup Final. The game was played in excellent spirit with both sides playing good hard, clean Rugby. The Bowden lads are a credit to their club

Last Saturday saw the 3rd annual Ladies Day Lunch, when yet again the event was sold out months in advance and 90+ Ladies enjoyed a fantastic afternoon out (I believe 1 0r 2 actually watched a little bit of rugby).  Maggie & Barry served up a lovely lunch whilst the Ladies enjoyed various bottles of wine and did their level best to beat last years bar takings.

The event raised a total of £1,798.10. (up £200 on last year!) for the Breast Cancer unit at Macclesfield Hospital, a fantastic effort by the girls. Thanks to everyone donated prizes, especially Halliwell Jones BMW Wilmslow for the very generous donation of  BMW bicycle and the use of a BMW car for the weekend. 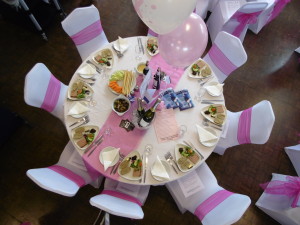 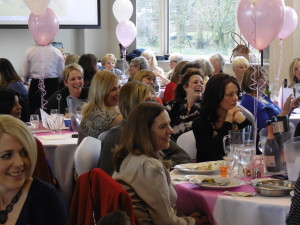 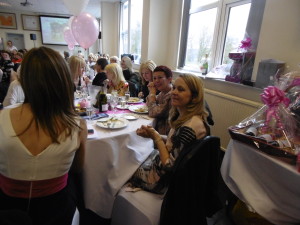 The lucky winner of the `BMW for a weekend` prize was Jess Kershaw who now has the use of a 2 series convertible for a weekend in April, courtesy of Halliwell Jones, BMW Wilmslow.  Pictured below is Izzy Kershaw accepting the prize on behalf of her sister, along with Jonathan Marsh from Halliwell Jones. 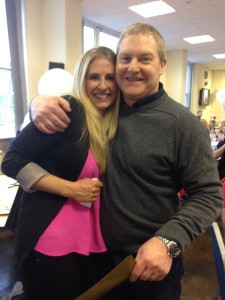 There are a huge number of people and companies to Thanks for making the day such a success, so Thanks to everyone who worked so hard before and on the actual day, and to all the companies who kindly donated prizes, and/or services.  Don`t forget to support the sponsors!

At time of writing, we have approx. 14 places left.  Please e-mail either Bev or myself if you want one, but make it quick.  3 course meal, lots of banter – £15 plus entry.

To encourage Mini/Junior sections to support the under 14`s and we are offering the following;

FREE entry for the kids in kit (and siblings)

£5 for ALL adults accompanying players in kit

Food before the match (£2.50 served in the Presidents Suite)

ALL get to flag the first team onto the pitch

Skills demonstration at half time

The End Of Season Players Dinner & Awards night has been booked for Thursday May 14th.  Put the date in your diary. Same format as last years successful dinner – watch this space for further details.

I`m pleased to say we have had now had 3 very strong applicants for this important post and we are moving towards interviews.

Saturday 18th also sees one of our sponsors, The Baths Hotel, have Cherry Valentine performing live music from 8.30

A great way to end the season with a round of Golf with friends..
Prizes

Hole Sponsorship – £30 per hole, your Logo will be displayed on the hole you sponsor and inside the programme. You will be able to advertise your company on the day to over 100 people

We are looking for every team (Mini, Junior & Senior) to enter 1 team at this event.

To reserve a team or Sponsor a hole or please email Robert.oliver@virginmoney.com

It’s time to make England proud and Twickenham Stadium a fortress at Rugby World Cup 2015. England Rugby Travel has official ticket-inclusive packages to all of England’s pool matches, including the mouth watering showdowns against Wales and Australia. Don’t miss it. Availability is limited so guarantee your seat today by calling 0844 788 5000 or visiting www.englandrugbytravel.com/rwc2015 to be part of history. The country is calling you.

I look forward to receiving any articles, news etc for publishing, so please ensure you forward your news to me.