Saturday saw The Blues travel to the Yorkshire Dales to take on the much vaunted Wharfedale home record – almost unbeatable at Threshfield over the past few seasons, indeed, the only home defeats this season have been against the top 4 in the League, and the home crowd were expecting an easy win over the Boys from Macclesfield.  However, a fantastic performance, based on dogged defence and some free flowing attacks, saw The Blues leave The Dales with 5 points in the bag and some happy smiles on the faces of players, coaches and supporters alike. 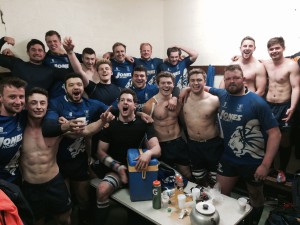 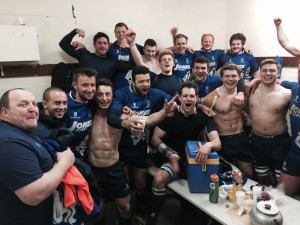 Some Happy Faces in the Macc dressing room on Satuday

The Blues have been steadily improving over the past few games and this result was just reward for the hard work the coaching staff & players have put in since the 1st July.  The victory was even sweeter when you consider the entire 20 man squad was made up of contracted players, no Dual Registered or Loan Players and these are the guys who will be playing for Macc. next season. 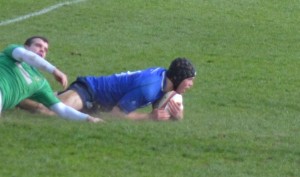 Max Smith goes over for the bonus point try 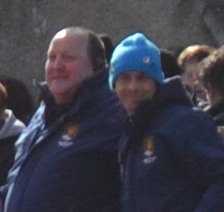 Some comments from Wharfedale supporters on Rolling Maul Website;

” Macc played with great passion and the joy they showed at their win certainly helped counter bitter  wind and temperatures of yesterday. Well done lads.”

As you probably know, The Blues entertain relegation threatened Cinderford in the last home match of the season.  Come down and wish the boys luck for what should be a cracking game between Macclesfield, desperate for a home win and hitting some form and Cinderford, scrapping for survival in this league.

The 2nds can just about claim the League title with victory over old rivals and fellow title chasers, Sedgley Park – Good Luck to Zack and the boys for that one.

The table topping 3rds travel to Northwich where they could clinch the title and the 4ths entertain Crewe & Nantwich.

Stop Press; Unfortunately the 2nds game cannot now be played at 5.00 and will kick off at 3.00.

Prior to The Blues game, Macclesfield Under 15`s entertain Dorking Under 15`s on the main pitch at 1.00

After too many seasons to remember, Albert Simpson is hanging up his track suit for the final time this Saturday.  Albert tried to retire from the position of 4th Official a couple of seasons back, but stayed on (Thankfully) as we were unable to find a replacement for this key role.  I`d like to take this opportunity to say `Thank You` to Albert for his sterling work as 4th Official over the last few seasons – Albert, we appreciate the great job you`ve done and wish you well in `retirement`.

This clearly means we are looking for a replacement as 4th Official for Home Games, something we are required to supply, so if you are interested in filling this vitally important position please e-mail me peter@maccrugby.co.uk. I believe Albert has volunteered to steer the `new boy` (or girl!)  in the right direction for the first weeks.

to encourage Mini/Junior sections to support the under 15`s and we are offering the following;

FREE entry for the kids in kit (and siblings)

£5 for ALL adults accompanying players in kit

ALL get to flag the first team onto the pitch

Skills demonstration at half time

Giles is in conversation with a `key player` for next season and we are keen to assist in finding him a job.  He is graduating this June and is predicted a 2:1 in Business Management and is ideally looking for a career in the Marketing/Advertising business.  If you are able to assist by way of offering an interview, pointing him in the right direction etc. please contact me peter@maccrugby.co.uk  Thanks in anticipation.

The End Of Season Players Dinner & Awards night is being held on May 14th 7.00 for 7.30.  Last seasons dinner was a sell out with over 100 in attendance so book early (and please pay!) at your earliest opportunity so you don`t miss out!  £20 gets you 2 course dinner, Rugby Speaker (to be confirmed) and a comedian, plus all Players awards from 1st team to Colts (Players Player, Most improved)

Lets see the season out with a smile and celebrate the good things about our club and the great game of rugby!

The above is a menu from the Dinner 40 years ago – which was the last time we held the dinner on a Friday during the season – I seem to recall all 5 sides got stuffed by Winnington Park the next day!  Anyone else at that dinner going to this one??!!

The Whitchurch festival is a real blue ribbon event, with 84 teams from Wales, Cambridgeshire, Cheshire, Yorkshire and the Midlands all keen to grab the prestigious piece of silverware.

Unlike many other festivals there was no Plate or Shield to play for, it was a physical all or nothing competition and there could be no mistakes or losses, you were only going to make the Cup Final if you won all of your 6 qualifying group games to win your group and play for the winners cup.

We were welcomed by the old smiling face of Ex Macc Rugby player and member Mr Paul Mairs, all suited and booted to welcome the travelling Macc contingent as he wished us well for a great day’s rugby. I must congratulate Whitchurch Rugby Club as all the pitches, officials and hospitality were first class.

We had our pre-festival coaches meeting and were quite shocked that there would be no 7 tackle and turnover rule, as we have such a great team of tacklers this put an additional dimension to the competition. One additional anomaly, and one that hurt us in the 2013 Cheshire Cup Finals, was that you could win all your games and not qualify for the main Cup Finals, it’s a silly rule, so we had to ensure that we had quick ball to let our unrivalled runners to bang in the tries straight from the off. As you can see from the qualifying games, we dominated and tackled as if our lives depended on it.

After a nail biting hour of totting up by the Whitchurch officials, we received confirmation that we were top try scorers and so were winners of the Group – Phew. We all had the sick feeling in our stomachs as the boys couldn’t have given any more and it would have been so unjust to have been unbeaten and not made the Cup Final.

The final was going to be a different affair, we had watched Mold in their qualifying games and they were powerful and determined. They had beaten a very impressive touring side from Melbourne and were clear winners of their group. We had to be on top of our game.

The game started nervously by both sides, with what seemed like 10 mins of defending and must have been 14 phases of play on the Macclesfield touchline, Mold went over for a try. What happened next is testimony to the spirit in our team.

A fantastic planned move from the off resulted in a fantastic Macclesfield try, then in quick succession two more to secure a very memorable and exhausting victory.

What was a real bonus was the compliments from the other coaches and parents at how well the boys conducted themselves and again showed a level of understanding and skill way beyond their years.

All the coaches and parents we’re very proud. 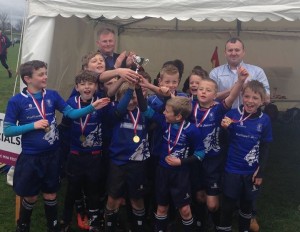 Congratulations to prop Sam Rodman (nephew of the legendary prop Matt Harding – his words, not mine!) who played for England Students against France last weekend.  Sam was a member of the Blues Squad last season before going off to study at University.

I`m conscious of the fact that at this time of year, the Mini / Junior section have numerous Tournaments, Festivals, Tours etc and it would be great to mention these on this page.  Please could I ask you to forward the relevant information in order that I can publicise? Thanks

I`m pleased to say we have had now had 3 very strong applicants for this important post and we are moving towards interviews.

The King`s School have reached the final of the Cheshire Cup at Under 14`s & Under 16`s and are playing the finals at Priory Park on Wednesday April 29th.

Come down and watch the stars of the future on the main pitch – FREE ENTRY FOR ALL – £2 for car parking. Bar open and food available.

A great way to end the season with a round of Golf with friends..
Prizes

Hole Sponsorship – £30 per hole, your Logo will be displayed on the hole you sponsor and inside the programme. You will be able to advertise your company on the day to over 100 people

We are looking for every team (Mini, Junior & Senior) to enter 1 team at this event.

To reserve a team or Sponsor a hole or please email Robert.oliver@virginmoney.com

I look forward to receiving any articles, news etc for publishing, so please ensure you forward your news to me.