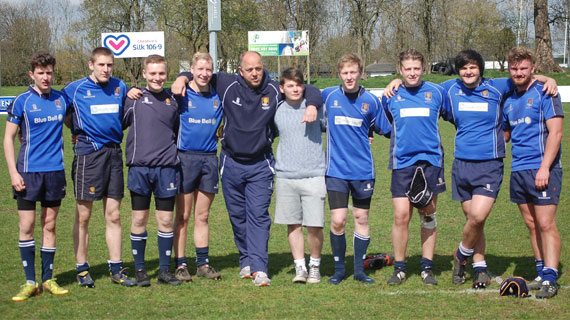 Coach Iain Taylor watched nine Colts play their last game of youth rugby for Macclesfield after playing and coaching together for ten years. Ben Hadfield got the Blues off to a great start with a first half hat trick. The second half saw George Hodkinson scoring two, one using his pace to break through the defence, the other powering over from a quickly tapped penalty from ten metres out. Aled Williams jinked his way to the tryline for his score, after a well worked backs move had opened up some space on an inside line. Sam Worthington scored the seventh, crashing over the line following some good work in the loose by the pack. Joe Stubbs scored the final try with the last play, breaking a tackle then sprinting free to slam the ball down for the score. Tom Leicester converted six from seven.

Despite conceding an early try, when Sandbach capitalised on a fumbled pass, the Colts looked in control in their eight try victory. The score could have been more, both George and Sam were held up over the line, and Harry and Matt couldn’t convince the referee that they had touched down correctly. Ben put in the ground work for his first try, gaining valuable yards with a powerful run through the midfield. Callum and Sam W took the ball on, then quick hands from Tom and Charlie put Ben in under the posts. Ben gave the pack momentum for his second try, leading the way with another powerful run off the back of a maul. Sam W and Ben probed the opposition defence close to the posts, until Ben forced his way over. Ben concluded his first half hat trick with a pick up from the back of a 5 metre scrum. Although the opposition knew what was coming, they could not prevent Ben from muscling over for his third.

Ben took a rest for the second half, replaced by George who got on the score sheet after a quarter of an hour. A neat tactical kick from Aled, set up the field position for the Blues. George broke free of the cover to sprint under the posts for the score. Aled then got himself onto the score sheet, cutting inside after a pass behind the centres had momentarily wrong footed the defence. George then scored his second from close range, being at first receiver from a quick tap penalty, then forcing his way over the line. George was sniffing his hat trick, with another break close to the line, this time Sam W benefited, picking up the ball and being driven over for a Colts career debut try. With the clock on red, Joe took Salty’s pass, broke a tackle, and then accelerated clear of the opposition defence to put the ball down next to the right hand post. Jacko hadn’t scored all season, so Tom passed on the conversion duties. Jacko’s kick curved between the posts to seal the victory.

Salty’s distribution was effective all afternoon, with three assists. The engine room of Callum and Sam W made a nuisance of themselves throughout the match. Tom’s kicking from hand played the team into the right areas of the pitch, aided by some concerted chasing by Jacko. It was good to end the season on a win.