The Club’s future is in Safe with home grown stars !

13 players from Macclesfield U14’s have been selected to play for Cheshire East U14’s squad in the recent games at Sale Sharks academy and vs. Lancashire at Sedgley Park. The lads equipped themselves exceptionally well with a playing record anyone would have be proud of

The lads are pictured with the coaching team of Robert Oliver & Matt Bowden after beating Lancashire at Sedgeley Park on Friday night. 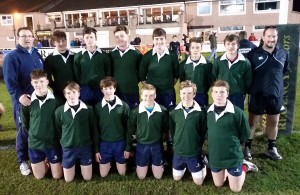 During the season they been coached by England U16’s coaches, Sale Sharks coaches and Dean Schofield of England, Toulon & Sale Sharks. Sale Sharks have fed back how impressed they have been with the standard of the players and how they play the game – high praise indeed.

Macc. U14’s final game of the season is the Cheshire Cup final on Sunday 3rd May vs Wilmslow

The U14’s travelled to Scotland on tour over the weekend of 10-12th April. They played Ross County on the G4 astro pitch at Murryfield on the Saturday winning 43-26 in a hard fought game. After the game they were entertained in a suite at Murryfield and then watched the Edinburgh  v Munster Pro 12 clash.

On Sunday they travelled to Kelso RUFC and played a second tough game winning 14-7. 22 players in total on tour and all had a great time, parents and coaches included.

On Sunday 3rd May Macclesfield U14’s play Wilmslow in the Cheshire Cup Final held at Wirral RUFC. KO is 3.30pm and any additional support would be very welcome.

We will also be sending 2 teams to Heaton Moor 7’s on Sunday 10th May and we will be holding our own 7’s festival at Macclesfield on Sunday 17th May with teams playing from  Lancashire,  Cheshire , Derbyshire, Leicestershire and  Kent.

On a wonderful spring day ,the boys stepped out onto the first team pitch  as a curtain raiser to the last first team home game of the season. Dorking had travelled a long way and from the pre match banter from their coaches they were confident of victory.

After ten minutes of play and a great try in the corner by Dan Salt their smugness was gone.Shortly afterwards a sneaky dart  by Josh Burke off the back of the scrum and a well timed ball back inside to James Crummack resulted in another well worked try.

The third try was an individual effort by Ollie Luckman who sliced the Dorking three quarter line in half and added insult to injury by throwing an outrageous dummy to the full back as he glided over the try line. 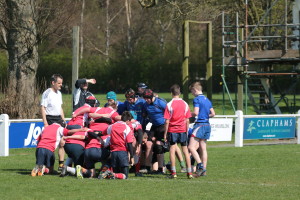 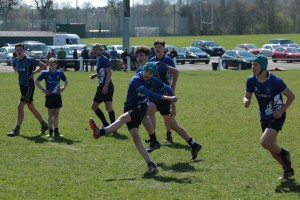 Dorking put in a tremendous defensive effort second half stopping a number of our chances  and scored themselves at the end of the game.

An enjoyable day for all ,and a good practice game before our Cheshire Bowl final against Chester in two weeks.

The U9’s team travelled to Wilmslow on a cloudy and overcast morning to take on 16 teams from across the region.  We took a team relatively green when it comes to competitions (albeit they play matches, festivals are a level up!).

In the group stages we faced Sedgley Park, Wilmslow Wizards and Huntingdon.  We lost heavily to a physical and well drilled Sedgley Park in the first (Sedgley 4 – 1 Macclesfield) with both sides suffering first match nerves it was a case of who settled first.

Second game was on the back of the first match – (Wilmslow Wizards) and the lads came alive, with some strong attacking play from the central players, crunching tackling and good runs on the wing; a much more competitive game, with Macclesfield hitting a 7-tackle turnover.  Unfortunately a couple of handling errors led to turn over ball too often, and in the end Wilmslow came away the victors (Macclesfield 5 – 8 Wilmslow Wizards).

Prior to the final group match, we worked the lad’s defence up to face Huntingdon.  The opposition came out of the starting blocks hard and had a very interesting tactic to avoid the U9’s tackle count rule (offload before tackle called).  The risk with this is the ball gets spilled more often and this showed on more than one occasion.  Combine that with Macclesfield’s strong defence, we came away with a convincing win (Macclesfield 5 – 1 Huntingdon), including three 7-tackle turnovers.

This put the lads into the 3rd place semi-final against Wilmslow Wolves.  The lads were riding the wave and primed for a battle on the pitch.  A huge effort in defence early on led to a spilled ball and turn over. A great carry from Macclesfield lads gave us the first try of the game.

Wilmslow were not daunted soon taking the second try, managing to finally break through the Macclesfield line.  A tackle into touch soon after the restart gave Wilmslow the ball, and some excellent ball handling saw them go into the break 2 – 1 up.

The second half saw Wilmslow start however they failed to gain more than 10m before 7-tackles saw the ball turned over.  Macclesfield played quickly out to the side and bought the scores level.  Both teams realised what was at stake, and were determined to resist any attacking.  The ball turned over twice in the last couple of minutes before a defensive error led to Wilmslow breaking through.  It was a close call for the referee whether the player stepped into touch before grounding the ball, but the try was awarded and the whistle blew, Macclesfield 2 – Wilmslow wolves 3.

The important thing about defeat is what you take from it and the Macclesfield Lads can take a great deal from this.  They can defend superbly, and attack well and they need to build on that as a team.  They played hard, in a tough group and gained valuable competition experience!

A great day out at a well organised Wilmslow Festival.

U7,8,9,10,11 all take part in the Cheshire festival at various clubs across Cheshire.  U8 s festival is being held @Priory Park and hosted by Macclesfield RUFC.