So the season has ended, the AGM held and the Players Awards Dinner successfully negotiated.  Whilst the players, at all ages, start a well earned rest, the Coaching Staff, Groundsmen, Admin. Staff and Committee members carry on to ensure all is in order for the start of a new season in September.

As always, we are on the look out for volunteers in any capacity, so if you feel you can help your club in some way, please drop me an e-mail and I`ll have a chat with you.

The AGM was held on May 20th, at which, the Exec. Committee reluctantly accepted Clive Hammond`s resignation from the post of Hon. President due to personal reasons.  I`d personally like to say Thank You to Clive for his support and sage like advice since I took on the role of Chairman 3 seasons ago, and his leadership as our President.

Clive will  be  succeeded by John Webster (Webbers), former player and currently one of the valued team of groundsmen (if the President can volunteer as a groundsman, I`m sure you can offer your services to the club).  Welcome on board Webbers.

The Executive Committee were re elected unanimously for a 4th term.

There were also Life Memberships awarded to the following  very long standing members (over 50 years in each case) who have served on numerous committees and continue to support the club in many ways.

Congratulations to all 3 very deserving members.

We will shortly be unveiling the new Director of Youth Rugby and the new Playing Committee, so watch this space for further news.

A brief update regarding the `new` pitches;

We have spent a lot of time since the end of the season trying to improve the drainage and general quality of these pitches by using `shock waves` to blast compressed air into the ground (to break up compacted sub soil and allow water to disperse).  This has been followed up by drilling dozens of holes on a tractor mounted auger, these are then backfilled with drainage stone and topped with sand.  All pitches will be fertilized and re seeded shortly.

The Blues fixture list is in the process of being issued and will be published on the website as soon as it`s official – the draft list shows some great opportunities to enjoy a great lunch followed by watching some fantastic rugby, so make sure you look out for the lunch dates and book your places!

I`m off for a couple of weeks and will keep you updated on any news & information on my return.  Thanks for all your support over the last season and have a great summer!

Head Coach Giles Heagerty spoke to me recently about the squad for next season in National Two, which is looking to be in pretty good shape. We are only a couple of players down on last season with some exciting additions. Prop, Marshall Gadd has joined from Championship side Rotherham as player/forwards coach and we welcome back top try scorer Ryan Parkinson. Added to these two top players, Tom Mantell is back fit and raring to go! Giles is also in talks with several other players hoping to join the Blues squad.

Another addition to the team is Matt Coleridge, Head of Performance Analysis. Giles told me: “It’s all about marginal gains, using KPIs and statistical analysis to improve performance”. There is a great sponsorship opportunity here for someone’s brand on the Video Tower: ‘XXXXX sponsoring The Blues Performance Analysis’. 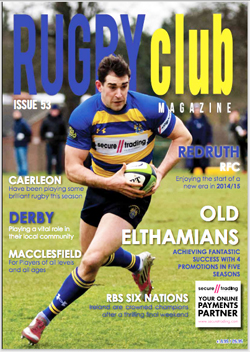 Other news about Macclesfield Rugby Club was reported in the Rugby Magazine back in April, you can download a digital version here: http://www.joomag.com/magazine/rugby-club-issue-53/0289007001429534134, we are on pages 38 – 43. A big thank you from the Club, to all our sponsorship friends that were able to support this feature.