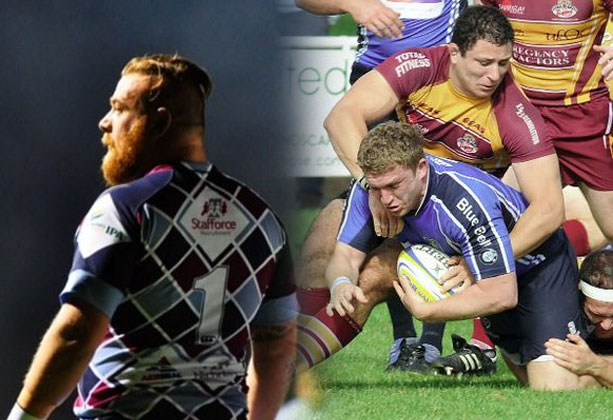 Macclesfield recently announced the signings of two familiar faces to Priory Parl. Prop Marshall Gadd was on loan at The Blues from Rotherham last season and has made the move permanent in a player/coach role with Macclesfield. The second of the two signings in back row forward Ryan Parkinson. ‘Parky’ tasted great success in his last stint at the Blues before moving to Sedgley Tigers. Parkinson finished leading try scorer in National 2 North when the Blues were promoted in the 13/14 season.

Parkinson admitted that the opportunity to return to Priory Park was one that he couldn’t turn down.

“I had a brief conversation with Giles and knew Macclesfield were interested again it was hard to turn down. I left a lot of friends here who are still here and when speaking to Giles about where he wanted to take the club it was a no brainer for me to re-join and get involved.”

Parky links up with Blues Head Coach Giles Heagerty for the third time in his rugby career. He was coached by the Macc gaffer during his time at Wilmslow and during his last term with The Blues.

“Giles was my gaffer quite a few years ago at Wilmslow, and you could see then he was going to be a top coach. He lives and breathes rugby and is very passionate about winning which suits me down to the ground. He also knows me very well and I’m hoping this knowledge will help me improve further as a player and get the best out of me.”

Marshall has personally moved, from a full time rugby professional to come to Macc, he therefore is going through a transitional stage, as facilities at Macclesfield may be a little different to what he was used to at Championship side Rotherham.

“My initial thoughts of Macc whilst on loan was the size of the gap between the two leagues in terms of professionalism, funding access to facilities and squad size, but all this aside there was something that felt right being at The Blues hence why I’m here now.”

“It’s a big change from what I’m use to but I’m really enjoying things at the moment, I just hope the coaching side of things doesn’t affect my playing side too much and we have a good season.”

Both Gadd and Parkinson have expressed hopes of a very competitive season in National 2, with a Blues squad they think can really challenge at the top.

“I, on a personal level would be bitterly disappointed if come the end of the season we weren’t right up there with a shout of going back up, although it’s going to be a long tough season judging by how teams are recruiting and plenty of local derbies, we have kept the majority of players from last year and added too which gives us a good foundation moving forward.”

“I personally play to win first and foremost above everything and anything else and I think all of the lads and management team have that same mind-set which was one of the biggest attractions for coming back. It looks like an even tougher league this year so we will have to play and train even harder to compete at the top of the league but I’m confident we will be there or thereabouts.”