We took 14 Under 11s to the Stockport RUFC Festival on Sunday to represent our 33 strong cohort against the best clubs in Cheshire, and a couple of Welsh touring sides.

Our lads must have stayed up with their dads watching the England vs Australia game on Saturday because they were asleep on their feet during their first game vs the Stockport A team in a game best forgotten. By our second game, the lads were beginning to wake up in a close fought game versus Lymm RUFC. By our third group game they had remembered the 3-man quick rucking and mauling that we’d spent September developing and our defending both at the breakdown and in receiving tactical kicks (something still unfamiliar to us) became superb.

That put us in the semi’s for the Plate, the 2nd of the 3 cups up for grabs. The boys turned over Rhyll RUFC 6 tries to nil in a hard fought game with their reward being a berth in the final against Bowdon RUFC. It was an intense final in which I’m pleased to say the boys “clicked” with some polished rugby on display, resulting in a 2 try to nil victory. In the way the festival was organised this season, this meant that we were runners up in the overall festival.

All 14 lads (Will Barton, Albert Bradshaw, James Budd, Josh Evenden, Road Elliott, Sam Davies, Joe Hartley, Haydn Keogh, Oliver Ransom, Finlay Usher, Edward Whittingham, Matthew Whylie, Dan Williams and Tom Wilmot) each made a superb contribution and it has been absolutely a pleasure watching them develop, whether over the last season or the last five. Special mention for today goes to Dan Williams as top scorer with 4 tries and a masterclass in quick reactions down the left wing; Tom Wilmot for some superb power runs towards the end, at one point carrying both the ball and half the opposition 10m up field through sheer determination; and Roan Elliot for scoring two tries and giving a masterclass in hard and low tackling. Bring on the season! 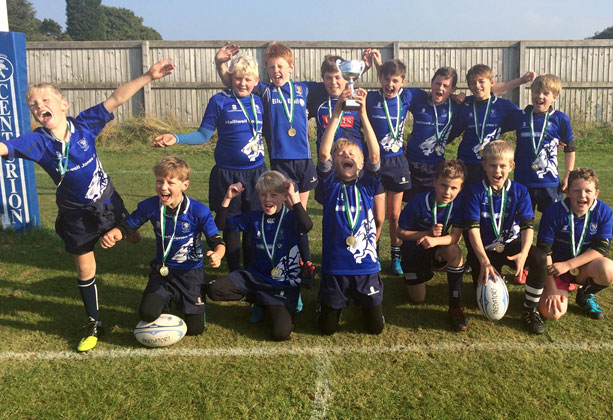