On Saturday, The Blues produced, probably their best display of the season so far, to see off a Sale side who came to Priory Park full of confidence on the back of a win against in form Stourbridge, but went back to Heywood Road on the wrong end of a 54 – 7 score line.  This was Sale`s worst defeat in over 5 years and gives the Macc Lads a real boost going into Christmas.

Thanks to Rob Hockney & Nick Jones for the fantastic pictures.

The foundations for this fantastic result were laid by the pack as usual, giving an abundance of quality ball which scrum half Jordan Brookes and fly half Lewis Barker utilised superbly to keep the pressure on Sale all afternoon.  In a great team performance by all 20 players, full back Charlie Venables had his best game yet for Macc, and was deservedly adjudged the winner of the Claphams Landscapes Man of the Match award by former England Skipper, Steve Smith, with Lewis Barker running him a close second.

In front of the largest crowd of the season, The Blues scored 8 tries in their rout of Sale – 7 of which were converted by Lewis Barker in a fantastic display of place kicking by the Fly Half. The 5 league points gained, together with Sedgley Parks defeat at Preston, means the Blues go into the Christmas break 12 points clear at the top of National League 2 North.

To date, The Blues have only received 4 yellow cards this season, which is the lowest in the league and could go a long way to explaining the success of the team.

Big Thanks to everyone who purchased a Raffle Ticket on Saturday.  The winning ticket for Saturdays raffle – 2 tickets for England v. Wales at Twickenham in March are pictured below. (Pink 201 – 205) If these match yours, please contact me, peter@maccrugby.co.uk to claim your fantastic prize.  if the tickets aren`t claimed by Monday 4th January 2016, we will re draw the tickets.

There is now a break during the Christmas period, other than the Charity match (details below) so please make note of the fixtures if you`re planning on watching (or playing in!) any; 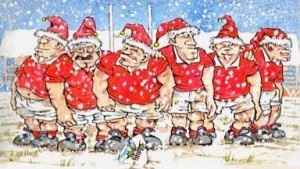 Wednesday 23rd December sees what is becoming, the Annual Christmas Challenge match between Kings School Old Boys and a Macclesfield Invitation XV.  Kick off is at 7.30, entry is free with a collection for East Cheshire Hospice.  Bar open from 6.00, food is available, raffle draw and all the fun of seeing people who should know better, playing rugby and enjoying themselves. 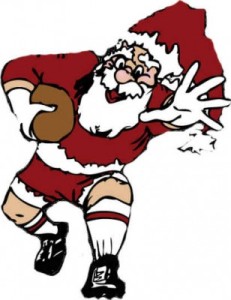 “On 23 December there will be a host of talent on display as The King’s School former pupils (and staff) take on a Macclesfield Rugby Club side in a charity game under lights. We will be collecting for East Cheshire Hospice during the game and there will be a raffle after. Thorneycroft Solicitors are sponsoring the event as well as being one of the clubs main sponsors through the season.

We hope to enjoy the company of the supporters in the bar after the game.

Macclesfield Rugby Club has a long standing relationship with The King’s School and many of the pupils, parents etc are involved in the juniors and minis every weekend.

There are currently around 20 Kings old boys registered in the senior squad at the club. In order to help foster this link and to provide a fantastic social and fundraising opportunity we are hoping to make this a regular fixture.

Please come along and support both teams, enjoy a good night in the bar and support a very worthwhile local charity.”

England have a fixture against Wales on Sunday 29th May 2016, kick off 3.00 pm.  Tickets are priced as follows; 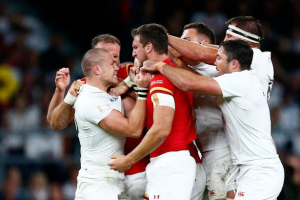 Our `Social sides` are organising a Tour to Jersey at the end of April from 22nd to 24th and I understand all players, ex players and alikadoos alike are welcome. To date 30 people  have said `yes` to touring. All different age groups from 18 to 55 +, both playing and non playing tourists. So we are on target for around 40 (probably cut off at 40 as Jersey might feel they are being invaded!).

To book your place, please reply to rupertdixon@gmail.com and pay your £75 deposit soonest 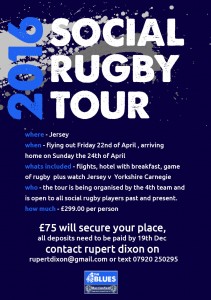 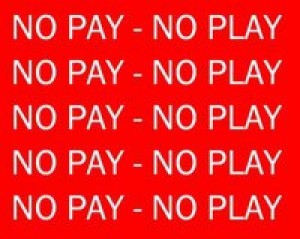 As we are now almost half way through the season, all annual subscriptions are now well overdue.  If you have somehow not paid, please ensure you do by the end of the month.  Your subs are the lifeblood of the club and without them, the club won`t function.  If you`re lucky enough to enjoy the facilities the club provide, it`s important you pay as everyone else does.  Also, if you are a player, you are not insured unless you`re a paid up member.

MERRY CHRISTMAS TO ALL OUR READERS!

That just leaves me to say `Merry Christmas, and a Happy, Healthy & Prosperous New Year to everyone.