The Cheshire derby failed to be effected by the wet weather as Macclesfield ran out 54-7 winners after storming into a 33-0 half time lead.

Macclesfield Head Coach Giles Heagerty was delighted with his side’s showing in the first 40.

“The first half was some of the best rugby we’ve played all season. We had some very good spells in the first period and we gave ourselves the opportunity to finish off chances we created, and we did so. That first half was probably the most ruthless we’ve been all season. Charlie Venables was very good today, he said before the game he had a point to prove, and he certainly did it. Everyone contributed today though, it was a very strong performance.”

The Blues fired out of the blocks and had Sale deep in their own half from the off. On six minutes Macc got the first try, Josh Fowles marked his return to action with a try as he dived in out wide to cap of a fine team score sparked by a Charlie Venables break, 5-0.

Macclesfield got their second on 20 minutes, good work at the line out saw number 8 Ryan Parkinson smash over from close range, and Lewis Barker added the extras, 12-0.

Venables got a well deserved score of his own to add to a fine display, again making the initial break, he then found himself on the end diving onto a defensive fumble to claim his score out wide, Barker again with the conversion.

The hosts wrapped up the bonus point on the half hour mark, flanker Max Smith got on the end of a Fowles kick to grab his score, Barker converted and made it 26-0.

Macc got their fifth just before the break, outside centre Elliot Brierley spotted a gap and dived under to posts to give Barker a simple kick, and take the Blues into the break 33-0.

Sale came out after the break and got the score to get them off the mark. Tireless openside flanker Adam Aigbokhae burst through to touch down, Liam McGovern added the extras, 33-7.

Macc ended any hopes of a miraculous comeback five minutes later when Ryan Parkinson grabbed his brace, as he stormed in and dived under the posts, Barker again converted, 40-7.

The Blues made it two in quick succession three minutes later when Tom Eaton blasted over from close range, 47-7.

Sale then turned the screw on The Blues, but solid defence from the hosts denied their visitors any more consolation. Then on 74 minutes Dave Marwick got in on the act for Macclesfield again powering over from around the fringe, and Barker again obliged with the extras, to leave the final score in the Cheshire derby 54-7.

Sale Director of Rugby, Brendan Thomas was disappointed after his team’s showing.

“We were beaten by the better side today, it was always going to be hard to come to the top of the league and get a result. It was a particularly disappointing result considering our victory over Stourbridge last weekend. We need to show more consistency in our performances. We’ve got to be able to follow up on our positive performances and not let ourselves down like we have done. We’ve now got to work towards the Preston game after new year, and concentrate on getting a positive result.”

Mascot for the day – Charlie Ackerley 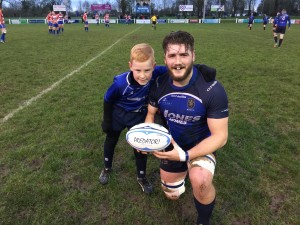