In last weeks Newsletter, I inexcusably and unwittingly gave incorrect details of the passing of Alan Hollinson, by naming Peter Hollinson.  My sincere apologies for any distress caused to the Hollinson family for my mistake.

TITLE IN TOUCHING DISTANCE FOR BLUES!

The Blues narrow win on Saturday at rivals Sedgley Park, sets up the possibility of Macclesfield being crowned  National League 2 North Champions in front of their own fans at Priory Park this Saturday after going 20 points clear at the top. Chester are the visitors and Macc require just 1 point from the game to secure the League title, however, Giles and the team will be desperate to take the title in style with a bonus point win against the Cheshire side.

Those lucky enough to witness the drama at Darlington Mowden Park 2 years ago, when The Blues snatched the title with the last play of the season, will never forget that afternoon.  Well, you can all be there this time round to support the team and cheer them on to the title with 3 games of the season still to play.

Why not get the day off to the perfect start by joining us for the pre match lunch priced at £10 plus entry – places still available I think.

We are encouraging as many people to attend as possible, and are offering half price entry to anyone arriving with a member, so bring your mates, bring your neighbours, bring your wife, girlfriend, boyfriend – just bring someone!  Kids who turn up in a Macclesfield shirt will be able to be photographed with the team after the game and entered into 2 draws…1 for the signed match ball – the one used to win the League! –  – and one for a signed copy of the team photo.  Kids…make sure your parents take you on Saturday.

In what was an absolutely enthralling, nail biting and extremely competitive match, The Macc Lads came out on top – just! – against 2nd placed Sedgley Tigers on Saturday.  In a match that twisted and turned, with the lead changing hands 6 times, The Blues went into the last 6 minutes knowing that if they could keep their 8 point advantage, the League title would theirs.  However, Sedgley came storming back with a converted try to ensure the title would be put on ice for another week. Indeed, Tigers had a chance to snatch it with a last gasp penalty, but the kick fell short and Macc came out on to win by the slenderest of margins, 33-34.  This match was a great advert for National League 2 rugby and I wish Sedgley Tigers all the best in the play offs against either Cambridge or Albanian later in the season.

Praise must be given to Giles and his coaching staff for the brave selection of playing No. 8 Ryan Parkinson at inside centre, with normal fly half Lewis Barker playing outside him.  It proved to a master stroke and went a long way to nullifying Tigers powerful backs. Parky with a brace of tries and Lewis with 6 out of 6 from the kicking tee, added to a wonderful team try finished by Charlie Venables, an opportunist try from Jordan Brookes, and some resolute defending, saw the boys from Priory Park to the cusp of the title.

Get down to Priory Park this Saturday to watch the boys finish the job.

Wednesday night (13th) sees  The Lions go to Sedgley Park knowing a win against their fiercest rivals would see them win the Cotton Traders Premier League.  The Lions  have been unbeaten since November and victory at Sedgley would top off a fantastic season for the 2nd team.  If you fancy going to watch, kick off is at 7.45 pm

As mentioned, The Lions go to Sedgley Park on Wednesday evening, ko 7.45, on Saturday the 3rds entertain local rivals Wilmslow 2nds and the 4ths travel the short distance to play Bowden 3rds.

Macclesfield take on Caldy in the Final of the Cheshire Cup on Tuesday 19th April at Sandbach RUFC, kick off 7.45pm.  Please register your interest with Jonathan (jonathan@maccrugby.co.uk) if you’d like to go on the supporters coach – cost dependant on numbers, but in the region of £7 a head.

Get behind YOUR TEAM and see if we can make it a League & Cup double!

Still tables, places available for the BIG ONE!  Book now to avoid disappointment! 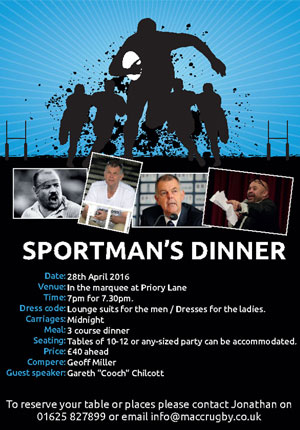 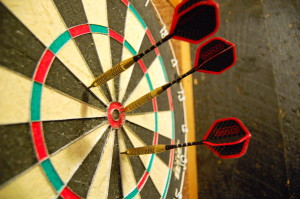 We now have a dart board in the lounge for use of members and guests.  If anyone fancies organising a fun league between teams, please contact Jonathan in the office.  This also applies for dominoes, crib etc.  – who knows, we could even enter teams into the Pub Leagues!

This is formal advice, that in accordance with the current Rules of Macclesfield R.U.F.C. Ltd., the Annual General Meeting of the Club will take place at the Clubhouse, Priory Park, on Tuesday 31st May at 7.00 p.m.