The Blues opened the scoring with just two minutes on the clock, openside flanker Matt Thorp finishing a well worked line out move, Tom Eaton added the extras on his 200th appearance for the home side.

Stourbridge dominated much of the first half possession but failed to make it count. They were punished on 22 minutes, centre Matt O’Regan taking an offload from Matt King to finish under the posts, 14-0.

Then, with five minutes before the break, Macc capped off a clinical first half performance with a wonderful team try, moving the ball from one wing to the other for King to finish in the corner, 19-0 half time.

Stourbridge responded early in the second half, centre Otutaha bursting through a gap and under the posts, 19-7.

The champions responded on 50 minutes through skipper Jordan Brookes as he sniped from the base of a ruck for the score, Eaton converted.

Then within the space of five minutes, the sides once again exchanged scores, Otutaha and King securing braces for their respective sides, 31-14.

On 70 minutes, Stour grabbed a consolation through Ashley Elvers, but it was soon cancelled out by two late Macc scores, the first from Mayor and then Eaton as he capped off his milestone appearance, 43-19. 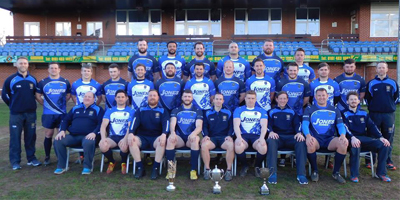