The count down to the new season is well under way, with all the teams in the senior, mini & junior sections raring to go after the summer break.  It’s that time of year when we all get exited about the fresh challenges a new season brings, and the thrill of playing, coaching or watching our great game again.

The Blues are back competing in National League 1 with the first home match on September 10th v. Fylde, which will once again, see the Family Fun Day at Priory Park.  But if you can’t wait until then, this Saturday sees a 4 club Festival of Rugby at Priory Park, with The Blues competing against Caldy, Readingensians & Loughborough Students, each team playing a 40 minute game against the other 3 clubs. This will be your chance to see the Blues new signings in action, along with all your old favourites, pitting their skills against some very competitive sides.

ENTRY IS FREE TO EVERYONE!

and weather permitting, Maggie & Barry will fire up the barbecue for you to purchase some fantastic food, and as you would expect, the bar will be open all afternoon & evening.

Come on down and see the Blues at home before the serious stuff starts… first matches kick off at 2.00pm

As you will all appreciate, running a rugby club is dependant on the financial support of its members and with this in mind, may I remind each and everyone of you, unless you pay your Annual Subscriptions (either in full by September 30th or Standing Order) you are NOT a member of MRUFC.  Members receive the benefit of 10% bar discount and players are covered by the Clubs insurance policy……..imperative if you are playing rugby.

As we seem to have a culture of people thinking its OK not to pay their subs, we have enlisted the help of Steve Branch (former Vets Captain) to ensure each and everyone pays in full.  Steve is working on a robust system which will mean everyone pays their way, making it fair on all those who do and have paid their subs.  I’m sure you will all give Steve your full support in his efforts needed revenue is raised for the club.

For those Social members amongst you, may I remind you of the Silk Club membership offer?

If you would like to assist your club, in any way, please contact Jonathan Marsh jonathan@maccrugby.co.uk and offer your services… there’s a job for everyone! 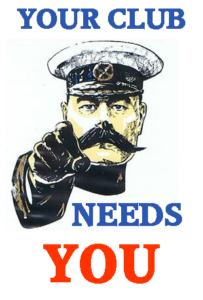 A few months ago, I asked for volunteers to come forward and do some research on our clubs history.  I was delighted when former 1st xv Captain and long standing member, Bob Jenner stepped up to the plate and took on this project.  Below are a few words from Bob to give you an insight into what he is doing and where we are with this.  If you can assist Bob with information, artefacts etc. I’m sure he’ll be pleased to accept.

“Sometime ago our revered Chairman observed that our Club when compared to most of our peers lacked a decent ‘history’ section on the website. In his inimitable style he asked if anyone could fill the gap and as has happened too often in the past I found myself stood alone! So I took up the challenge. This is the first of a few articles I’ll write over the course of the season laying out how we have developed the Club’s history section and giving a bit of historical detail on specific times and events. But first I want to set the scene because history is not only about the past, about old people, about things that don’t matter, it is literally His Story, stories from days past and that’s the approach I want to take because the Club’s culture is embedded in its history. The Club’s history is its members, it is made by its members and is made today as well as yesterday – just witness the playing success of so many of the teams last season, that’s historic!

So going forward the ‘history section’ on the website is now entitled “About our Club and History” (under The Club on the website). My first task is to build the collection of artefacts from the Club’s past. This small but growing collection includes all manner of things. We have a ticket to an Annual Dance at the now defunct Stanley Hall, a programme from a war-time game played to raise funds for the war effort and a letter confirming the lease of the Club’s first ever ground on Congleton Road. The artefacts are being gathered into safe storage and stored at the Club and in due course there will be a list on the website of what is available. If you have anything to add to this list please let me know, all items will be returned. Some of the artefacts are being displayed at the Club. Many are being scanned and copied into the “History of MRUFC” document that will soon be available via the website. This document is slowly and continuously being updated as information becomes available. Again if you have any ‘history’ you would like to add to the document please let me know.”

“Every club member past and present, young and old is part of the history of MRUFC. Our story is less about the games won and lost and more about the deeds of derring-do, of tours, of dances, of club dinners. It is the story of young players graduating from Mini, though Junior and Colts into Senior and Vets rugby before being able to regale all and sundry in the Lounge about how much better “we were in our day”. To this end I have started a series of videos in collaboration with Fallibroome School. The first editions will shortly be available via the website and BluesTV. Seven of the Club’s oldest members were captured on video discussing their memories of rugby and social events through the 50s and 60s first at the London Road and then at Tytherington. More recently an equally distinguished group but less venerable members have been filmed by Fallibroome School discussing their memories of times at Tytherington and Priory Park. These videos will be developed during the next school year and hopefully become available to the Club for a MRUFC Oscars Evening early in 2017.

The Living History theme is being developed with recorded conversations with various club members the contents of which will be included in the History document. Also, during this season I hope to record conversations with all team captains (from 1st XV to under eights) to be included in the Club’s audio history. These will be supplemented with short video clips of club members talking about various historical artefacts such as shirts that are hung around the Club, plaques that have been given to the Club and so forth. Finally, the History document is being constantly updated, please have a look at it and if you want to contribute then please get in touch via the Club.”

Almost 12 months ago, Tim Peakman asked me if we had a Memorial Board at the club, to commemorate those members who had lost their lives while serving our country.  After much searching of the club cupboards and questioning of some of our more senior members, it transpired that we don’t. Tim then decided he would put the wheels in motion to ensure this very important ‘oversight’ was rectified.  Tim enlisted the help of Bob Jenner and in turn, Bob has worked with a chap named Harry Carlisle, who has worked tirelessly to research and find out the names and history of those who lost their lives.  Below is an update from Bob.

“Earlier in the year I told you that the Club intended to reinstate a Roll of Honour board to commemorate club members who have lost their lives whilst serving in the armed forces. A long-standing club member has generously offered to buy the board so we are now planning for a service of dedication to be held at the Clubhouse at 10:45 on Friday 11th November.

Finally, it is a sad fact of modern life that these 13 are probably not the only former members to have lost their lives whilst in the services. We would like the board to be a complete record of appreciation of the sacrifice of former members so if you know of anyone again please let me know via the Club.”

At this point, I’d personally like to thank Bob, Tim & Harry for their valuable time and efforts in ensuring this very important project is completed.

If anyone out there has some rugby related news they’d like to see in the Newsletter, please e-mail to Jonathan Marsh;  jonathan@maccrugby.co.uk