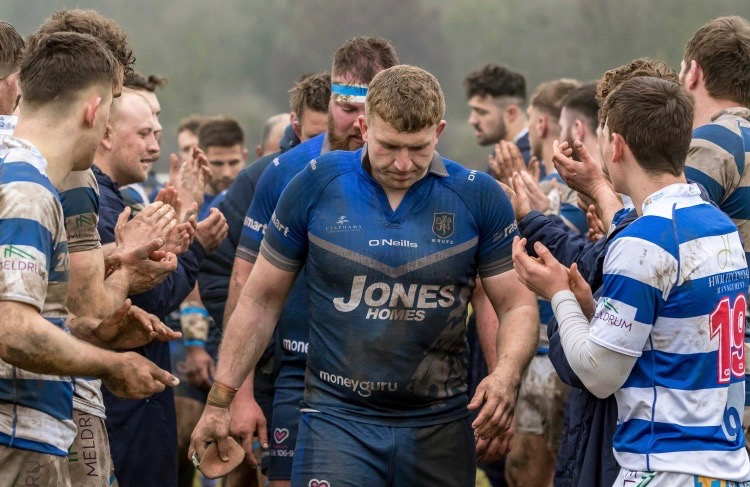 Macclesfield went into this game perhaps a little undercooked compared to their opponents after their home fixture against Hinkley was a casualty of the weather, although it did give The Blues the chance to rest some tired bodies and mend some bumps and bruises. While Tynedale beat Stourbridge and are riding high in 5th, and have the second best home record having only lost once, they picked up a try bonus in 10 out of 12 fixtures and have the top try scoring record in the league (115) with 65% of those at home but there was hope as the North Easterners have only conceded 1 try less the than the Cheshire outfit.

It was the visitors who started the quicker too, scoring through Brendan Berry in their first attack, who broke through after a patient multi-phase build up in the Tyne ’22 that had been launched off a powerful scrum. Lewis Barker converted making it 7-0 after 3 mins.

Macclesfield were back in the opposition red zone moments later and were looking to increase their advantage, but the move broke down and were afforded another opportunity having stolen a 4 man lineout just 5m out from the home team’s line, again they couldn’t take advantage. To take Tynedale’s scalp away you have to be clinical and so the Blues would live to rue the  opportunities as the Home side grew into the game with good spells of possession and bit back having stolen the ball deep in their own half, turning defence into attack to score through James Spencer after a soft break on 10 mins, and they punched in again on 14 minutes with a try from a set move off a lineout, faking the maul and peeling round the corner through Scott Powell who put centre William miller through the gap and under the posts (14-7 after 14 mins).

There were no further scores through to half time but the visitors were frequently under the cosh in terms of possession and territory. The Tynedale machine had come alive and looked dangerous with ball in hand. Their forwards were powerful in the carry and their backs ran some interesting lines out the back, and whether they got the ball or not it tied in defenders. Both sides let themselves down with handling errors in the greasy conditions. The Blues didn’t venture into the red zone with ball in hand again in this half, but did well to repel the attacking threat and remain in the game at the break.

Macclesfield needed to find another gear in the second period but had the worst possible start as Tynedale recorded their third score on 43 minutes through Spencer again, with another great set move, punching up the middle having gone off the top on the edge of the ’22 and then gone back the way they came to score in the corner (21-7).

There was a reaction from the Blues, who enjoyed a good spell of territory and multiple spells of possession in the Tynedale half but proved fruitless as the home sides’ defence held firm and Macc couldn’t keep hold of the ball although one ruck turnovers looked suspiciously illegal to this commentator but that doesn’t take anything away from the men in Blue and White hoops were clearly the better side, as Macc’s poor discipline began to yield metres as the home team hunted a bonus point try.

Macclesfield had to withstand immense pressure on the hour as the game was being played exclusively in their own ’22. Spencer thought he had bagged his hatrick at one point but for the minor fact the ball was passed forward and then knocked at least 6 feet forward but the crowd didn’t seem to see that as an issue and celebrated anyway (hopefully sarcastically), only to see the score ruled out. The Cheshire side held on as long as they could, repelling multiple attacks before prop Ben Wilkinson found a way through 2 phases after a scrum 5m out after a flurry of pens given away by the men in Blue in their own red zone including a yellow card for captain Ryan Parkinson who had petulantly slapped the ball out of the scrum half’s hand at the breakdown (28-7 after 67 mins).

Macclesfield will be frustrated with how easily they gave up the 5th try on 72 minutes having conceded a scrum penalty on half way, despite the introduction on Billy Robinson and Nico Nyemba into the front row, which Tyne kicked to the corner, mauled and picked to more than make the result safe. If there was a positive at this stage it was the response from those on the field for Macclesfield who dominated the last 8 minutes of the game, and a nice try was scored by Charlie Reed who finished well in the corner after a patient build up on 75 minutes.

Despite their quick start, The Blues were largely outplayed in this encounter and although their were some circumstances they could have done without such as the withdrawal of Tom Burden with a head injury early on, and the withdrawal of influential prop Tom Mantell the night before the game took a bit of power from the side. The quality of the tries they did score was outstanding but they need to be more clinical in taking their opportunities. Next week its one of the sides below them in the league Luctonians, who come to visit and on paper should be a 5 pointer but the Midlanders will be fighting for their lives and won’t give up the win easily.