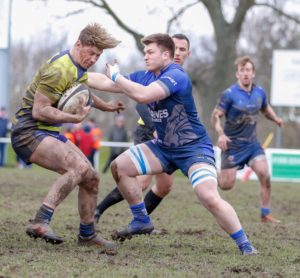 Sale were looking to return to the top of the league after Sedgley won on Friday night while the Blues were looking to avenge their defeat in October, and restore some local pride and it was the home side who started the better, having x3 ’22 entries in the first 12 minutes but had nothing to show for it as FC seemed able to defend the phases and force the mistake. Sale FC had given away penalties in their own half and The Blues put to the corner twice, but couldn’t find a way through the Sale defence that made life difficult at the breakdown and were physical in the tackle. The third attack came from the drop out return after Charlie Reed’s missed penalty shot but Chris Townsend’s pass was intercepted by Jake Barron who had to be chased down by Dan Lomax.

When Sale finally got some ball they appeared to generate space out wide as their backs got the ball passed the defenders with decoy runners chopping off. With their first real attack, FC left forwards out wide, while winning collisions in the midfield to generate space with Jonty Rawcliffe made ground followed by a half break from the impressive Neil Briggs off 10 who took FC close, before Rawlings went over in the corner on 17 mins.

The Blues continued to be wasteful having another 2 chances in the Sale ’22 but appeared to lack cutting edge and struggle with the counter ruck, while at the other end of the pitch Sale were clinical taking points from all 3 opp ’22 entries they had in that first half, with Johnson adding a penalty firstly after Neil Briggs’ break on halfway and then when Barron took advantage of Winterbottom’s inability to finish the tackle due to a shoulder injury.

The visitors went in ahead, 11-0 at half time, their defence once again proving to be the difference but the Blues were generating opportunities.

In truth, with the exception of one entry, Macc were never really in the game as Sale appeared to step up a gear, utilising their 2 sided attack very well and at times it seemed like they had more men on the field with the number of attacking options at their disposal. Their carrying was making metres and they continued to find space out wide and the league toppers recorded 8 entries in the second half.

Little went well for Macc in the second half, a prime example was when a lineout was stolen on halfway 5 minutes into the second period and Neil Briggs who was in fine form, broke through the middle of the Blues’ defence, and moments later Birchall went through off a tip o from Mark Lawrence before the ball was lost in the tackle. Ryan Parkinson provided one of the high points of the half for the home side as he broke the line off the back of a scrum 5m of his own line but the break couldn’t be converted. Moments later the Blues picked up a penalty in midfield that was put into the corner but the ball was spilled out the back of the resulting maul and that was the Priory park outfit’s last opportunity, rarely getting out of their own half from there on in.

Sales’ gameplan was working well as they fixed and chopped off central defenders in the line with decoy runners and Ex-England Counties Fly Half Chris Johnson played deep to spring the ball into the wide areas.

On 63 minutes the red zone pressure told and Birchall picked over to put the game beyond Macc and further pressure led to Rawcliffe scoring minutes later making it 0-23 after 67 minutes. The flood gates opened as the Blues were spent and FC got the bonus point through Moorhouse on 77 mins, who got another just after from a speculative cross field kick but blame shouldn’t be put on Morton who had nothing left to try having been pegged back for so long.

In truth this was an example of why you have to take your chances against the league leaders because they will. Sales defence is what will probably win the league for them this year, and we saw why at Priory Park this weekend. At times their rush defence at A, B, C and D defender looked suspiciously off side but that really is clutching at straws as Macc were just not good enough for long enough. For an hour it was anyone’s game but Sale’s ability to take something away from every attack killed Macclesfield. The players at Sale’s disposal was impressive with former Sale Sharks’ Neil Briggs, Andy Hughes and Jake Pope, as well as the experienced Gaz Rawlings, and England Counties’ Under 20’s captain Christian Taylor.

Its Otley at home next week for the Blues who were the opposition in the game that saw former Director of Rugby Giles Heagerty sacked. It will be interesting to see how far Macc have come since then.