Disappointment at Mortimer Park on Saturday as Macclesfield succumbed to bottom of North Two outfit Luctonians by 17-12 who, in the process, moved up one place in the relegation zone leaving Sheffield who lost at home to Otley in the Yorkshire ‘Derby’ languishing at the basement with just three games to play. Read more >>

Note from the Chairman

“I would like to take this opportunity to thank a few of our players who will be making their last appearance for Macclesfield at Priory Park on Saturday.

Skipper Ryan Parkinson has played 155 games for Macc.  Over seven seasons and scored over 100 tries, (an incredible strike rate for anyone, never mind a forward!)  been involved in two promotions with 50 + games as captain and represented Macclesfield for Cheshire & England Counties

2nd row Dave Marwick has played 156 games or Macc. over six seasons, scored 46 tries, (again, an unbelievable rate for a 2nd row),  been involved in two promotions, skippered the team on a number of occasions and represented Macclesfield for Cheshire & England Counties.

Lewis Barker has played over 60 games for Macc., scored 20 tries, and kicked over 350 points over three seasons and represented Macclesfield for Cheshire

I`m sure you`d all like to join me in saying a huge THANK YOU for their efforts in a Blues Shirt over the past few years, and in wishing them well in whatever they do going forward.  Why not come down to Priory Park on Saturday and say goodbye to some of our most popular players as they bid their farewells to the Priory Park faithful. “

On 18th April I fly out to Kathmandu to attempt the trek up to Everest Base Camp (yes I know at 66 I should know better but there you have it).

I’m doing this as part of any sponsored charity event BUT I do know how lucky I am to even contemplate it so I’m dedicating my luck to the East Cheshire Hospice and will make a significant donation on my return.

A number of family/friends have said they would like to contribute so I have widened the donation process to a JustGiving page. Now I’m trying to get this message out to as many friends/family as I can.

JustGiving sends your donation straight to East Cheshire Hospice and automatically reclaims Gift Aid if you are a UK taxpayer, so your donation is worth even more.

Thank you for your support!

Cancer Research UK’s Race for Life is a series of women-only events raising money for research into all 200 types of cancer.

Hi, we are a group of mums who meet on the side lines of Macclesfield RUFC each week, to support our U12 sons playing rugby.

We believe sport brings communities together, no more so than rugby, and we consider ourselves extremely lucky to have a large group of wonderful parents who come down to the club each week to support their young boys, rain or shine!

But, like any community we have been touched by Cancer, so our team of lovely mums are heading to Tatton Park on June 23rd to tackle the ‘Pretty Muddy 5K’ in the hope of raising money for a great charity that will support those living with cancer now and those in the future.

We have affectionately called our team of mums ‘The Ruggerbabes’ and whilst we hope to have fun, we really want to raise funds to beat cancer.

We would be ever so grateful if you could read our fundraising page and make a donation to help us raise £1000 as a team. 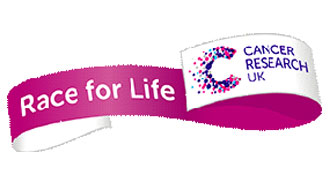 Congratulations to our very own winger Charlie Reed who is in the 26 man England Students squad to go France! #macclesfield #englandrugby#englandstudentsrugby 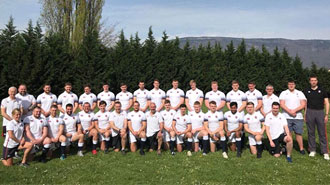 Recently a number of people have asked me “where are we with the Clubs History project”? As the season edges closer to its natural conclusion it’s probably as good a time as any to provide an update.

I have progressed the project on three threads; Timeline, Written History and Living History. Each of these are an evolving thread so you’ll see ever more results as the year goes on, and to support these I’ve been collecting artefacts; reports, photos, videos, trophies which I am cataloguing for a future “museum type” display.

The Timeline is regularly updated (access is via the website (Menu>The Club>History) but I would welcome any updates that club members might to add. History is a continuous thing and lives from moment 1 (that’s the end of the lesson for today). The Timeline will never be complete as it is a record of events as they occurred so send in your updates whenever.

The Written History is proving a much longer project as it has a nominal end point i.e. when I have documented information pertaining to every year pf the Club’s existence. So far I am up to the mid-seventies and am hoping to complete the document by end of the year (2018). It will not be a published book but in the modern way will be an electronic document accessible to all possibly through the website. This contains a lot more detail than the Timeline documenting as it does the deeds and daring-do of Blues players over the c140 years that rugby has been played in Macclesfield.

Finally the Living History this is a small but growing collection of videos that will be accessible through BluesTV (Youtube). Each video has a theme which includes a walk and talk through the grounds that MRUFC have played in Macclesfield, Former Players reminds of the London Road ground, the life and times of the Rugga Buggas. This latter video, with Mike Keeling describing how the Rugga Buggas grew from his own “very individual” introduction to rugby and Macclesfield RUFC, went viral (well nearly) went it first went out, if you haven’t seen it track it down on BluesTV. I now have to convert to bite size chunks 5 hours of video recording the memories of players from the Tytherington/move to Priory Park era. Look out for these in the coming months.

What an unusal photograph – Pete Harper without a beer! Did that big man take it from you? 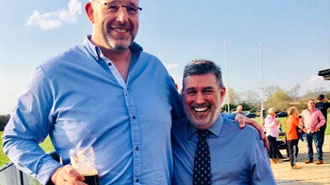 A great weekend of rugby for our U13s. We beat Marple at their festival of sport on Saturday. We beat Hoylake in the Cheshire cup waterfall tournament 60-10 on Sunday. We now progress to the semis this coming Sunday where we play Anselmians. Such a credit to the lads. They have come so far as a team & individuals this season. 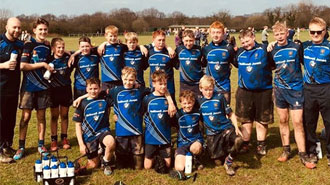 Head over to @RFU for your chance to win a coaching session for your club with Eddie Jones 👇🌹 twitter.com/rfu/status/148…