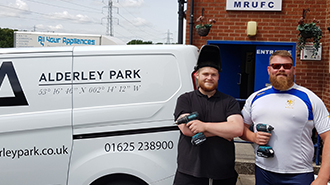 11 Club representatives and a number of volunteers from the local community joined forces to renovate the Club foyer area which was looking a little shabby. Long standing Club member, Andy McLean took a day out of his schedule during the week to fit down lighters in the entrance and a suspended ceiling to hide some unsightly pipework. Alderley Park also volunteered the services of ex-rugby player, James Burden, to help with the project. James brought his van of maintenance equipment, mig welder and pressure washer which proved invaluable. Although the project still needs a few final finishing touches, the Club and its force of community volunteers still found time to also paint two of the changing rooms, tidy up the weights room and finally enjoy the reward of a beer and BBQ in the late afternoon sunshine.

“On Saturday 23rd June, members, community volunteers and players from Macclesfield Rugby Club gathered to carry out some much needed maintenance projects as part of the RFU’s ‘Rugby Force’ weekend. The 11 strong team of volunteers started work painting the club entrance foyer before moving on to the changing rooms and weights room.”

“Everyone worked hard and we were able to achieve far more than we’d hoped to. Once the work was completed all the team sat down together to enjoy a few, well deserved beers in the sun with a barbecue. The Club would like to thank the volunteers for their sterling work, and hopes that we’ll be able to welcome them back at the newly-refurbished community hub in the future,” he added.

Home to Macclesfield Rugby, and based at Priory Park, MRUFC is an inclusive, community One-Club organisation where everyone is welcome and all levels of playing ability are catered for, from Mini and Junior, up to a senior level playing nationally.

NatWest RugbyForce 2018 is a nationwide programme that helps grassroots rugby clubs up and down the country to attract new members and become stronger and more sustainable for the future. RugbyForce weekends are a great way to bring members and the local community to the club and pull together to make improvements ahead of the new season.