The Colts played against a very strong BP side containing all U18’s, several Sale Sharks & County players on game on paper that they should have convincingly lost, but the game was not like that at all..

Macclesfield fielded 6 U17’s players in their stating line up and nearly caused the upset of the season !

Macc played into a breeze first half and were immediately under pressure from a much large BP side, some great tackling by returning player Joe Flynn and James Wilson kept BP out. There was no score until the 17th minute where the BP side were able to force their way over the line. The Macc lads regrouped and started to believe they could play rugby, Max Blackburn was immense in the line out, great throwing by Tom Whylie allowed Macc to dominate this set piece. Joe Heginbotham was playing a great game at scrum half releasing the backs well. Harry King left the field after 25 mins  with an injury after putting in some huge tackles with James Wilson. This meant a reshuffle, Harry Oliver cam off the bench at fly half to pick up where King left off.

After some aggressive defence from Reece Melville and Callum Roberts BP were forced backwards, Harry Oliver saw his chance and ripped the ball and outsprinted the BP defence to score a try, he converted his own score 7-7 – game on.

Macc continued this aggression and were awarded a penalty 40 meters from goal, Harry Oliver stepped up and stroked the ball between the posts, Macc were winning 10-7.

BP didn’t lie down and some superb play between their Sale Sharks & Cheshire players created 2 quick scores just on half time.

The second half started badly for Macc who concede another quick try. Macc then introduced James Oliver due to an injury to the superb Tom Hurst and re-shuffled the pack. This gave Macc a new lease of life and after some great handling from the backs, James Oliver sped down the wing, he went past the winger and side stepped the full back to score a superb individual try, Harry Oliver converted. BP were on the back foot and Macc were next to score after some great play by Holden and Harding releasing the backs, swift passing put Harry Oliver in space who outsprinted the whole BP back line to score his 2nd try, game on 22-28.

BP then score a superb try from their Sale Sharks scrum half, taking the score to 22-35. Macc piled on the pressure and after some great forward play Harry Harding forced his way over for a try.

The game finished with Macc wondering what could have been. A great result in front of Jason Hector, Head Coach Natal Sharks Academy who is in the UK on an coaches exchange visit. He was impressed with the way Macc played and never gave up, some great rugby and plenty to build on. 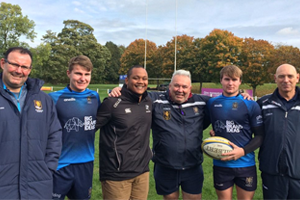