We have had four (that’s right, FOUR) new signings for the 1st XV! 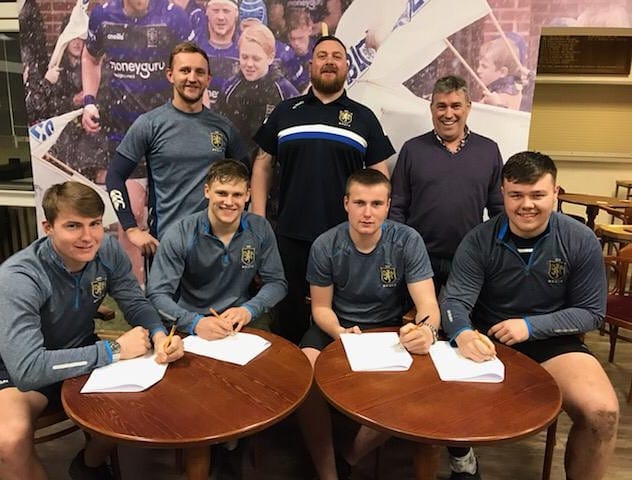 All have been right through the Mini and Junior Section from the age of 5 through to colts,
and now beyond.

If that wasn’t enough our very own young JAMES OLIVER received an important call last
week, to play for ENGLAND COUNTIES U18 against Ireland.

The 4 players who signed are all sons of ex-first team players, Rob Davies, Rob Oliver & Matt Harding. They have all played together throughout the Mini & Juniors coached by Rob Oliver, Matt Harding and Tony King. They were part of “The invincible team” who went 18 months undefeated in the U15/U16 season winning 3 Cheshire Cups, countless 7 aside festivals and other cup competitions. They also beat the National Schools Champions, Sedbergh School along the way.

The team they played in has produced 7 County players, the 4 below and Marcus Pyle, Harry Wheelton and Toby Moule

Will has been a player at Macclesfield since he was 5 years old, playing Fly Half or Full back Will has a fantastic turn of pace and a superb skill set. He plays for Kings School first XV and is part of the Sale Sharks U18 academy team for the 2018/2019 Premiership season. Will has presented Cheshire at U15 & U16 level. Will is developing into an excellent all-around player, his excels at distribution, kicking & has a great eye for a gap. Will is the youngest player to make his first team debut for Macclesfield fist XV, a fantastic achievement.

Harry has been playing at Macc since he was 9, a man mountain of a player standing at 6ft 4ins playing anywhere in the front 5. He plays for Wilmslow High School Fist XV, Cheshire U18’s and has been part of the Sale Sharks U18 academy team for the 2018/2019 Premiership season. Harry has also represented Cheshire at U15, U16 & U17 level. He has been Captain for the last 2 seasons of the U15 / U16 teams. Harry caught the eye of several Rugby League teams but has chosen to remain in Rugby Union. His presence on the pitch ihuge e and a true Macclesfield player.

James has played at Macclesfield since he was 5 with his twin brother Harry, a very versatile player with deceptive speed. James plays for Wilmslow High School first XV and has represented Cheshire at U15, U16 and for the last 2 seasons U18’s. James is a huge talent and this has been recognised by Cheshire Rugby as he has been part of the Cheshire U20’s squad for 2 seasons. James is a very direct back row player with huge ability in attack and tackles well above his size. James is also a very talented cricketer representing Cheshire at Rugby & Cricket in the same season, he players for Bramhall Cricket Club. James made his senior debut at the age of 16 last season and now his representative rugby is finished will concentrate on breaking into the first team

Harry has played at Macclesfield since he was 5 alongside James his twin brother, playing in the centre Harry is developing into an exceptional talent. Harry has represented Cheshire at U15, U16, and two seasons at U18. He is also  part of the Sale Sharks U18 academy team for the 2018/2019 premiership season. Harry has also represented England North U18’s in the recent divisional game and on the back of some very strong performances has been Selected for England Counties U18 to play against Ireland in Dublin next month. Harry’s heart is in Macclesfield playing for the Colts when he can. He is Captain of Wilmslow High School first XV taking the team to the Cheshire Cup final being played later this month. This representative rugby has limited Harrys ability to play for Macclesfield this season.