It’s an oft used clique to say it was a game of two halves as in this match Macclesfield dominated the first 40 minutes leading 19-12 at half time, then the home side blossomed and we were disjointed and disorganised.  They did however score four tries to register a league bonus point. 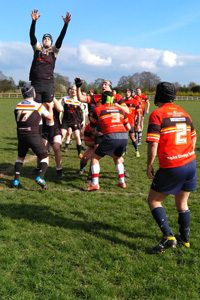 The fourth team had a full substitutes bench which included three guests from Wilmslow Rugby Club, our friends are always welcome to join us, indeed Taff Jones playing front row scored one of our tries.  Another was scored by Rob McLeod before painfully dislocating a finger.  Other tries by Ben Heginbotham and captain Ryan Brown.

The backs had an unfamiliar look to them.  Paul Smith continued at scrum half and Brown at full back were in their usual.positions but Tom Jennings, Jake Lodge, Ollie Bedford and Alex May were new to the side whilst Ben Hegginbotham moved to number 12.

An early injury to Callum Wright after only 4 minutes was an unfortunate incident so he played no further part, so severely was he hurt he could barely hobble onto the pitch to participate in the normal applause tunnel at the conclusion.  The good news is that he has all summer to recover.

The disjointedness was surprising because the forwards had their usual heavy pack.  Jim Welch and Simon Street in the second row bossed the line outs and Rupert Dixon had an outstanding appearance at hooker.  He always hit his jumpers with his throw ins and his loose play was very solid.  Mike Dale Keith Javid and Troy Croaker augmented the eight to secure the ball as Macclesfield went through the phases. Russ Tomlinson and Mike Ford, the other guests from Wilmslow were initially on the substitutes bench but when they entered the fray showed their class.  We would hope to continue this liaison as Wilmslow are struggling with player shortages and find it difficult to field a third team each week.

It was a typical end of season encounter.  Macclesfield even played in borrowed red shirts
Smith spent 10 minutes in the naughty boys corner.  Everyone played well but there was no cohesion.  The vice captain Jeremy Bostock was missed, he always brings discipline and endeavour to the forwards.

Easter weekend is blank but after that the squad and their supporters fly off on their end of season tour for four days to Gibraltar and Malagar.  It is essentially a culture and fun tour with a rugby game arranged against the Royal Navy Veterans.  They have offered to host  a BBQ afterwards followed by some light-hearted bar room games and songs.