Harry is a true Macclesfield Rugby Club Member and his family have been associated with the club for over 50 years.

The story started with Harry’s Grandfather, Keith Oliver playing back in Tytherington with several members still around today when the club moved to its present home Keith played several seasons for the first team and moved through the teams to the Vets. Time for Keith’s son to take over representing the family at the club joining Macc at U12’s through playing for all age groups to the first team. He was part of the invincible teams of the 1990’s beating Sale Sharks (as they are now) in 1992 to win the clubs first Cheshire Cup & securing several league promotions along the way. Robert represented Cheshire at several age groups U15 – U20’s, as well as North of England Colts and had a final England trial, he is still involved coaching the Colts team who are playing in the U18 Cheshire Cup final tomorrow. Robert will step down as a coach after 12 years of coaching at the club. 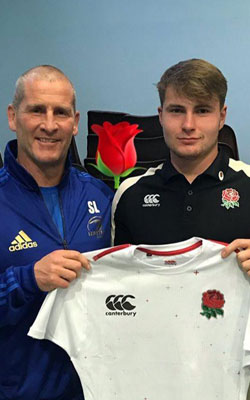 Harry started playing rugby at Macc when he was 5 years old, playing alongside his brother James. He played at every age group at the club winning countless tournaments, Cheshire Cups and was Vice Captain of the invincible team who didn’t lose a game for 2 seasons! Harry then started to play representative rugby representing Cheshire at U14 / U1

5 / U16 / U18’s & U20’s. He was part of the Sale Sharks Premiership Academy this season alongside Will Davies & Harry Harding. Harry was then selected to play for the North of England U18’s team with fellow Macclesfield player Toby Moule and then after 2 great games against South West & London received the ultimate call for England.

Harry attends Wilmslow High School along with 5 other teammates from Macc Colts, he is the first team School Captain taking the school to the Cheshire Cup Final & last 16 in the National Schools Cup.

Harry is proof that playing club rugby with friends is an important part of the journey to becoming an all-around rugby player, success is down to the team and playing for your mates. Harry has been overwhelmed by messages of support from across the Rugby Club.

Cut him in half and it says Macclesfield Rugby Club, a true club man that could be your child……. work hard, listen to coaches and enjoy it !! That’s the secret of his success !!

Harry, his brother James, Will Davies and Harry Harding have all signed contracts for the first team next season so the story continues……..