Into the final month of the 18/19 campaign and sadly even now we are looking to a place in the competitive Northern Premier League next season as defeat on Saturday at the hands of table-topping promotion candidates Hull Ionians ensured that Macclesfield will be relegated from National Two North with just a couple of games left in this fraught season.

Trailing 33-7 at the interval the side showed plenty of spirit in the second half to score three more tries and earn a bonus point but it was simply not enough and a big disappointment to all those former players who had gathered before the game for their annual pre-match dinner in a packed clubhouse. Strangely replacing us in Two North will be the City neighbours of Ionians – Hull who have been runaway leaders of the North Premier league this campaign whilst we will be joining several familiar names and some new ones when the fixture list is published. Harrogate, Sandal,
Wirral, Lymm and Kendal to name but a few but that is not until September and we have still got a couple of games to set out our stall before this season finally closes and it is from my point of view that I close my days as ‘Clubman’ with relegation. Hopefully my successor – if indeed there is one – will be able to report on better things next season.

The other games in Two North saw county neighbours Chester who currently sit second go down at Sedgley Park with a rather surprising scoreline of 45-7 but they still stand in the ‘playoff’ spot. Huddersfield in the third spot beat Fylde in a high scoring encounter at Lockwood Park whilst at the other end of the table Peterborough lost at Sheffield Tigers, Leicester Lions won a close game at home to Hinckley 14-10 and mid-table Preston Grasshoppers came out on top of Stourbridge in another high scoring game by 40-34. Otley lost out at home to South Leicester by 38-41 in what sounds an exciting game and Tynedale just beat Wharfedale up in the North East 27-21.

As previously indicated, we just have two more games before the season closes and already there are changes going on behind the scenes at Priory Park hopefully to ensure that we can make a decent fist of it in the North Premier next season but be assured the sides currently in that league will be targeting us so hopefully all will be sorted on the coaching/playing side so that we can start next season with attitude and some much-needed wins that whoever takes over this role as ‘Clubman’ – if indeed anyone holds their hands up to the commitment to do it – can report on some success and not the other way round as it has been this season.

Away from the 1 st XV the Seconds travelled over to Caldy on Saturday and lost a high scoring encounter that saw no less than 85 points scored in total while the 3 rd XV entertained and beat Wirral Seconds by 36-24. The 4th XV had a free weekend but, as always ‘Clubman’ had a smile on his face after his ‘other’ rugby love beat London Broncos 48-12 to retain the top spot at this early stage of the RL season!!

For those travelling to Stourbridge for Saturday’s game, the home club will play at:

From my Tytherington address is some 76 miles so allow a good 2 hours travel time.

I mentioned above as I have on a couple of occasions that if there is anyone out there prepared to continue this column next season then can they please contact me and I will pass on all required details. If not then ‘Clubman’ will be a thing of the past come next season!

Fixtures for Saturday 13 April as follows:

From next season onwards, all matchday squad players aged between six and 18 will be guaranteed at least half a game! 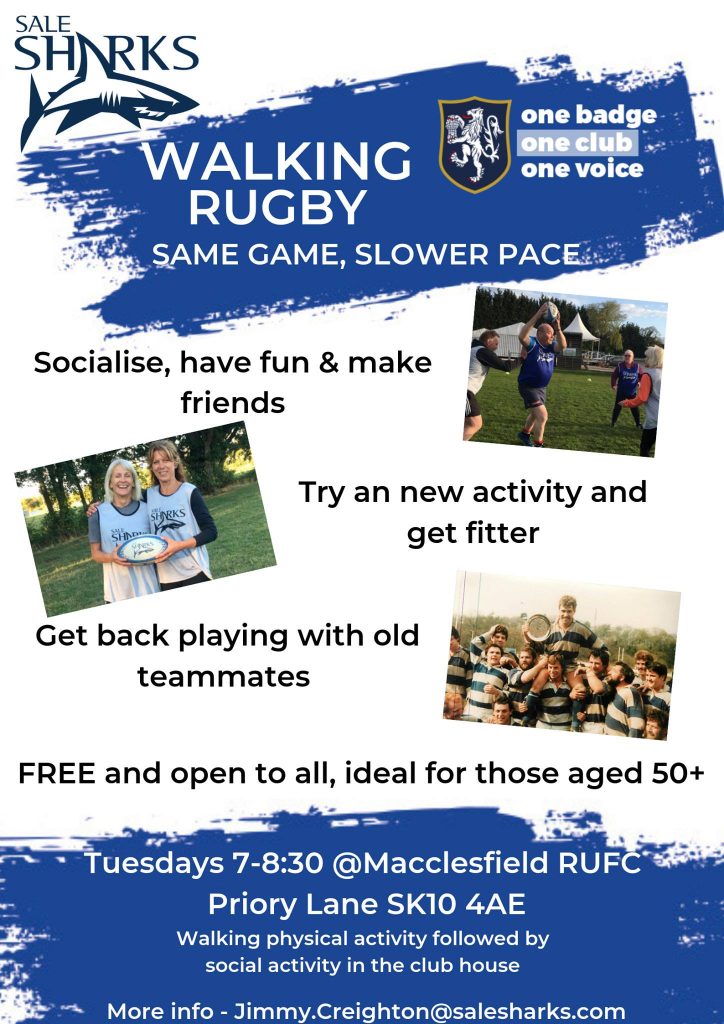 Love walking? Love Rugby? Then walking rugby is for you! Our first session starts at 7 pm on Tuesday 30th of April at Macclesfield RUFC, followed by a social activity in the clubhouse!

It was a full house to bid Tom Mantell farewell after 240 appearances for the club over 11 years! Well done Tom and thank you, from a very grateful club!