Macclesfield were relegated today at Priory Park after a strong first half inspired Hull Ionians to tear Macclesfield apart.

Unfortunately the game was emotional as it was front row forward Tom Mantell’s last home game for Macc after a great career, in which he made 240 appearances.

The game also marked fellow front row forward Sam Moss’s 300th game for the club and he capped the milestone with a fine performance in the second half.

Relegation was confirmed after relegation rivals Sheffield Tigers convincingly beat Peterborough Lions today. On the other hand, Hull are now five points clear at the top of the table.

The away side started the better of the two sides, putting Macc under the cosh with the vast majority of possession and territory. 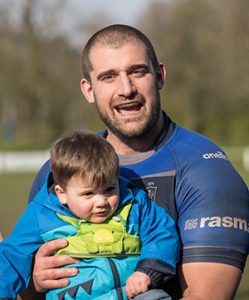 Macc defended courageously and when Hull looked as if they were going to open the scoring, with a line out in the corner, Macc sacked it and survived an early scare.

Hull remained dominant in the first half and went into the changing rooms at the end of the half 33-0.

First half tries from James Tincknell, Mark Wigham, Steve Slingsby, meant the game was over before the second half began.

Tincknell scored two converted tries in the first half, powering over the line each time. Number 8 Wigham did the same to enhance Hull’s strong lead, with the second being converted.

Slingsby then finished off an excellent backline passage of play, as he was allowed space in the corner to finish and score a converted try.

In the second half, Macc were much improved and won the second half by scoring four consolation tries to secure a bonus point. Josh Redfern scored two, while Tom Burden and Will Davis also crossed.

Redfern’s first was through scoring a great pick and go try and using his pace to race over the line for a converted try under the posts, that was converted by skipper Tom Morton.

His second was through another pick and go try from the 22, when again his pace was too much for the Hull defence and scored another converted try that was converted by Morton.

Davis then crossed after a great break by Sam Broster and offload meant that Davis had the space to exploit his pace and score a great unconverted try.

Burden scored after he used his strength to power through the Hull pack and get over the line for a converted try.

Hull added two extra tries in the second half, from Slingsby and Lewis Minkin.

Slingsby was on hand to finish another excellent backline move and star man Minikin then made an excellent break through the middle using his great pace to score another converted try.

Interim head coach, Andy Appleyard said: ‘We haven’t really performed in the first half and it’s another one for us that’s got away and we didn’t have time to make a game of it.

‘It was a game of two half’s and we can take positives from our performance in the first half.’

‘Unfortunately we let them get in front too much and allowed them to show they’re class and they are a top side but once again really proud of the lads for their commitment and hard work.’

Mantell said: ‘It was a tough game today, playing against top of the league but we stepped it up second half and we can be proud of our performance in the second period.

‘I think we just carried the ball harder and fronted up, exploiting Hull’s weaknesses in the second half.

‘My favourite memory of Macclesfield will be competing in National 1 after gaining promotion and having a great season and almost gaining promotion. I’ll always remember that and all the other memories I’ve had here.’