The rugby season has almost arrived, the First team played Hull and the Seconds entertained Congleton 1st fifteen. Both non-league clashes but very important to players and coaches.

The 2nd kicked off at 1.00 pm captained this week by prop James Cross. A ding ding match finished 12 points all, both Macclesfield tries scored by Lloyd Coates with outstanding contributions from Paul Davenport and Pete Board playing numbers 8 and 10 respectively.

The First team then took the field, conditions were dry but the wind certainly influenced the play. As is normal in these pre-season warm-up matches we had four 20 minute quarters which allowed coaches to mix and match formations. The result isn’t important what mattered was seeing whether all the training ground moves have been absorbed into full contact rugby.
Club coach Andy Appleyard and his staff were delighted, Apps was the catalyst who attracted Hull to travel all the way across the Pennines. The visitors had swapped places with us they gained promotion into the league North 1 which we were related from last season.

The full list has been published as follows, home games in capitals.

(Hopefully, Macclesfield will have already have achieved promotion!) 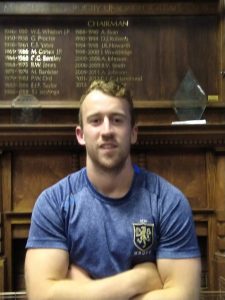 Clubman is delighted to write a profile of our prolific points-scoring Club Captain, Tom Morton. How fortunate we are to have Tom leading the side, he joined from Auckland N.Z. where he spent his year out. He had achieved selection for England Under-17s, Under-18s and Under-20s and in every one of his internationals, he scored at least 9 points.

On returning here, he chose to play for Macclesfield. As a local boy, he already knew many of our squad. Morton loves the responsibility of captaincy, playing at number 10 he’s already the fulcrum and skippering is an extension of that role. He’s so buoyant with his enthusiasm! He loves the victories and witnessing the development of the ball via his backs and forwards as he dictates the plays.

Tom was schooled by his favourite coach John Fletcher the then England U 18 manager who he said promotes player expression and was always able to get his charges to punch above their weight in every position.

He’s a natural sportsman excelling at all games, but he doesn’t rest, 6.00am sees him in the gym every day before anyone else is working out, his philosophy being that he won’t be intercepted at that time by professional calls from his busy accountancy practise.

Clubman is concerned with such a lot of travelling to far away games but Morton assures him what great fun they have on their journeys and on the returns how they enjoy the lusty singing in the coach. ( Some rugby traditions never die)

Tom Morton we’re thrilled and privileged you’re our skipper, have a great season.

Authorship of this Clubman Column has now passed down the line. Tribute must be acknowledged to my predecessor, Geoff Allen, who has been reporting club activities; previous writers were Peter Ord and Bob Jenner, the column has been a feature for 44 years and Geoff has been writing it for over half of that time.

Geoff, you’re a difficult act to follow. Thank you for all your efforts to MRUFC as a player, supporter, reporter and helper to your successor. Geoff was recognised at the AGM by the award of Honorary Club Membership.